How Long Does It Take To Learn German? 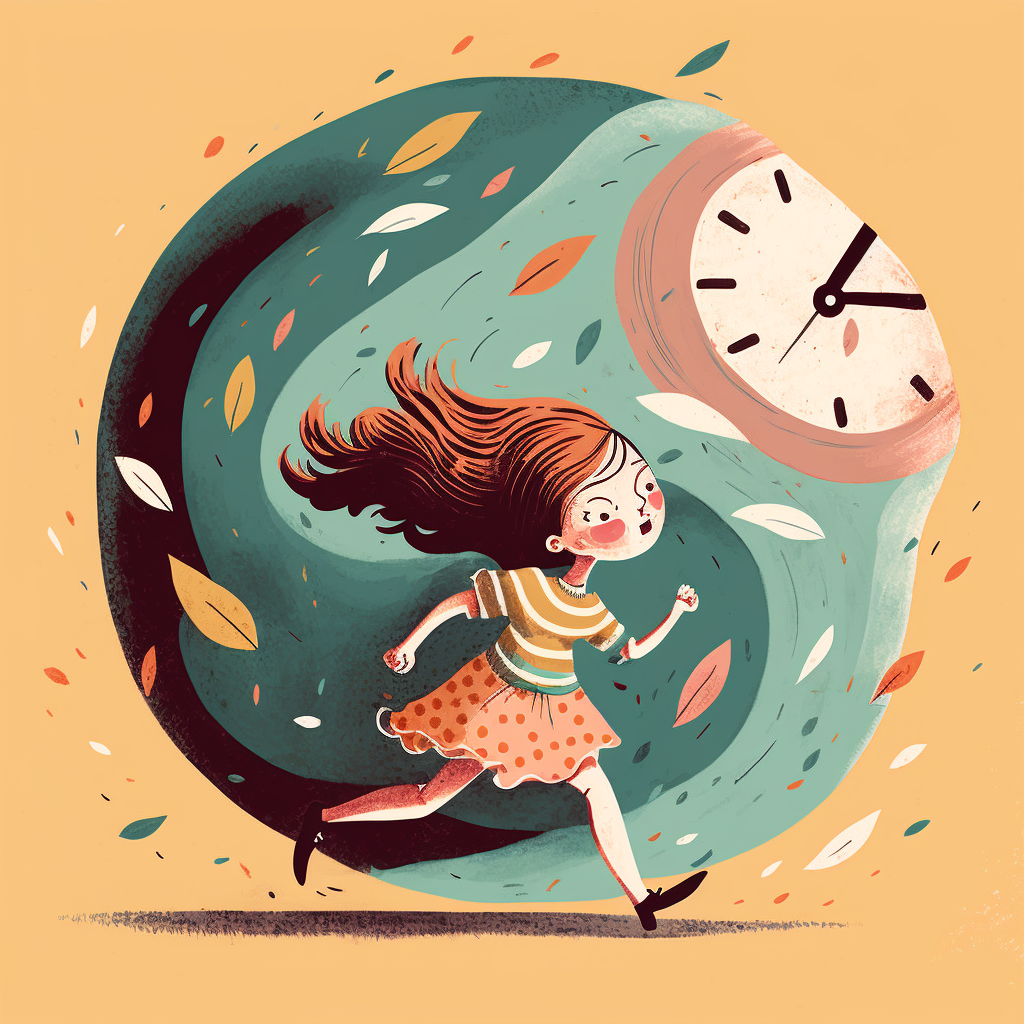 Learning a new language, like German, is a challenging but rewarding endeavor. It is difficult to determine exactly how long it will take to learn German as it depends on various factors, such as your current language abilities, how much time you are able to dedicate to study, and how you choose to study.

Some people may be able to become proficient in German in as little as a few months, while others may take several years. It is best to set specific goals for yourself and work towards achieving them at your own pace.

But first, let’s have a look at some key factors that will influence how much time it’s going to take for each individual case:

Not An Overnight Task

One thing that is certain, however, is that learning German is not a task that can be completed overnight. It will take time and effort to develop a strong foundation in the language. With dedication and consistent practice, however, you can begin to see progress in your German language abilities within a few short months.

As a general guideline, becoming fluent (confident in your proficiency across a wide range of topics and circumstances) will probably take a bit longer, especially for those who don’t yet have a background in Germanic languages. But it all depends on how much time you invest, and how you go about studying and practicing.

One effective way to learn German is to immerse yourself in the language by listening to German music, watching German movies and TV shows, and reading German books. This can help you become familiar with the sounds and rhythms of the language, as well as build your vocabulary.

In addition to immersion, it is also important to practice speaking and writing German as much as possible. This can be done through conversing with native German speakers, joining a language exchange program, or working with a tutor. By practicing regularly, you can improve your pronunciation, grammar, and sentence structure.

Another effective way to learn German is to enroll in a formal language course. This can provide you with structured lessons and guidance from a trained language instructor. Language courses can also offer opportunities to practice speaking and listening with other learners, which can help you improve your skills more quickly.

Finally, let’s take a look at some rough (but data-backed) estimates for how long it would take a native English speaker to learn German:

So How Many Weeks Does it Take?

According to the Foreign Service Institute (FSI), it takes approximately 36 weeks or 900 class hours to learn German as a second language. This is based on the FSI’s estimation of how long it takes an English speaker to reach proficiency in various languages.

The Foreign Service Institute (FSI) classifies languages into four categories based on how long it takes for an English speaker to reach proficiency in that language. German is classified as a Category II language, which means that it is considered to be relatively easy for an English speaker to learn, but still ranked harder than Category I languages, such as Danish or Dutch. 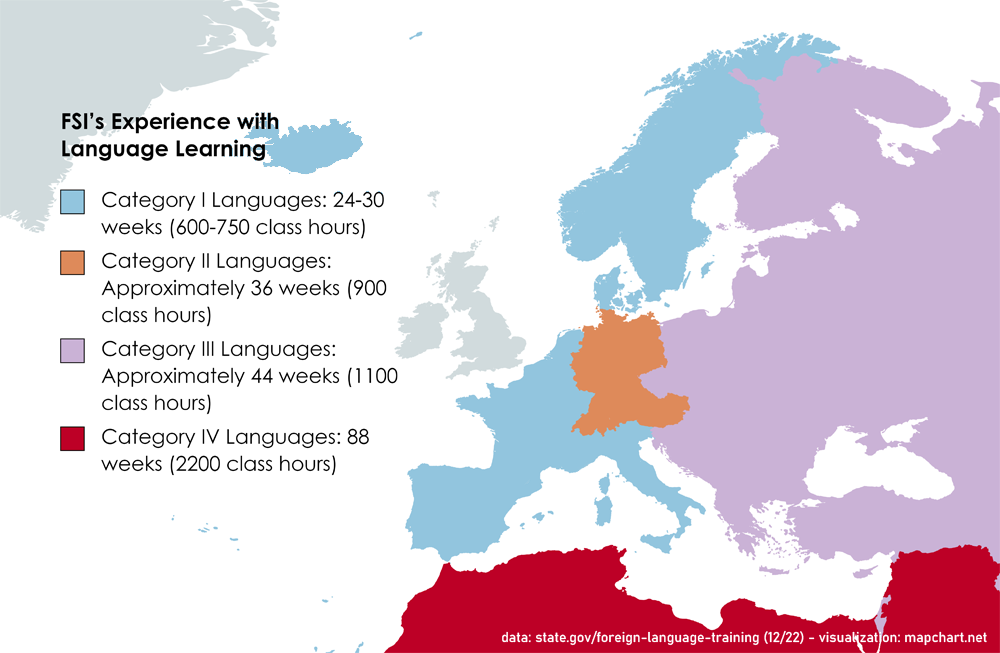 But is German really so much more difficult than Danish or Dutch? According to the FSI, apparently yes, because they put German in the same category as Swahili! 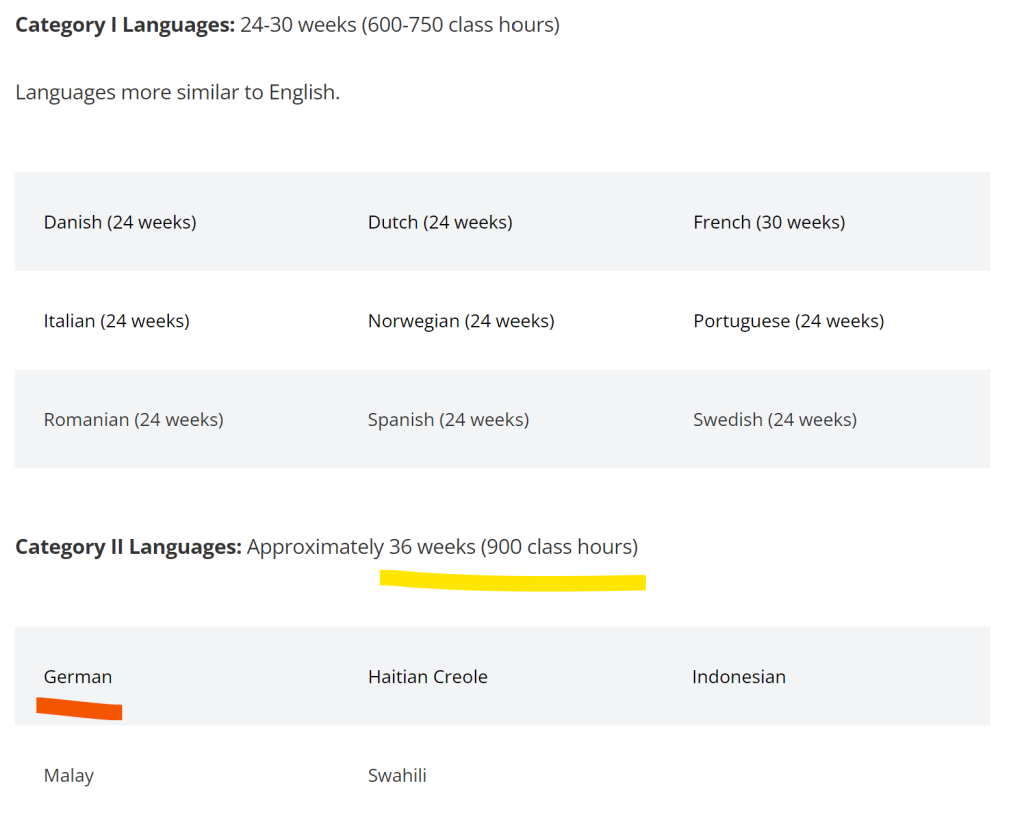 Keep in mind that this is just an estimation, and the actual time it takes to learn German can vary depending on a variety of factors, such as a person’s natural ability with languages, their motivation and dedication to studying, and their exposure to the language outside of a classroom setting.

Ultimately, the amount of time it takes to learn German will vary depending on your individual abilities and goals. With dedication and consistent practice, however, you can develop a strong foundation in the language and become proficient in German.