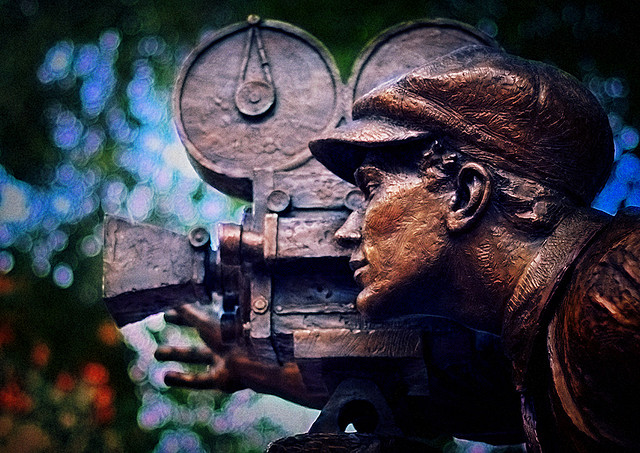 Some rights reserved (CC) by Express Monorail via flickr

Learning German with stories is an effective and fun way to practice and enjoy yourself at the same time. I’ve already written about a selection of German short stories. Today, I’d like to present a number of my top 10 favorite German movies for learners (in no particular order). Where available, I’ve added vocabulary and exercise resources to help you make the most out of using these movies in your German studies.

Set in 1984 East Berlin, an agent of the secret East-German police (Stasi, short for Staatssicherheit) conducts a surveillance operation on two young artists, becoming preoccupied with the couple’s personal life. This award-winning drama movie is rich with engaging dialogue, convincing characters and a tense plot.

Since the dialogues are sometimes long and key to understanding, turning on subtitles might prove to be essential for most learners.

Based on the 1971 “Stanford Prison Experiment”, this is a story of a team of researchers re-creating prison conditions in a laboratory. Twenty men are asked to play the roles of prisoners and guards over a period of two weeks. But it’s only so long before the participants become overly engrossed in their play, and the boundaries between reality and role-play slowly come apart.

Albeit the film’s somewhat dark theme, its plot is rather easy to follow due to the very clearly defined roles and setting.

A group of young Berlin activists are breaking into rich people’s homes, rearranging furniture and leaving obscure notes to make them feel insecure. When one of the affluent home-owners returns unexpectedly, the activists find themselves hatching out a make-shift kidnapping plot.

Since the protagonists are all in their late 20s this movie is a good way to get into colloquial speech.

It’s 1990. The Wall has fallen. The protagonist’s mother has just awoken from a coma, unaware that her beloved German Democratic Republic is not existing anymore, and he soon finds himself creating an elaborate fantasy to convince her that everything is still as it used to be.

This film is not only a great way to learn about Germany’s split and reunification from a personal perspective, it also features some sections where the protagonist narrates the action on screen, which is helpful for following the plot.

Exercises by University of Michigan [DOC]

A young German woman has exactly 20 minutes to raise 100,000 Deutschmarks to protect her boyfriend who has fallen in with the wrong people. This fast-paced (and often strange) movie is set against the background of Berlin and re-tells the same story in different ways.

This movie can be a good starting point for discussions in a learning group due to its alternative narratives.

Two patients in a hospital discover they are terminally ill. Sharing a tequila bottle, they realize that one of them has never seen the ocean. So they escape from the hospital and steal a car, driving it towards the German North Sea coast, unaware that the car’s trunk holds one million in cash whose owners are not to be trifled with.

While the actors are sometimes mumbling a bit, the plot is easy to follow and dialogues are full of common patterns of speech.

Starring many popular German actors, this movie, set in West Germany during the 60s and 70s, tells the story of the radical-left militant group Rote Arme Fraktion, illuminating their protagonists’ motivations, denials and complications. It’s both political thriller, psychological drama, and certainly worth a watch to better understand this sad and difficult chapter of German history.

This is the original film Nicolas Cage’s “City of Angels” was based upon. The story is the same: an angel falls in love with a human woman, but in order to love her fully, he has to descend from his angelic status. Director Wim Wenders does a beautiful job of creating context and poetic atmosphere.

The relaxed pace of the movie and use of voice-over internal monologues makes this classic approachable for learners.

When widower Ali convinces the prostitute Yeter to move in with him, his Son Nejat is irritated. Onlly when Nejat finds out that Yeter regularly sends money to her daughter Ayten, he begins to show compassion. After Yeter’s sudden death, Nejat decides to fly to Turkey to look for Ayten, whose trace leads back to Germany.

The narrative style of this movie is very visual which allows to follow the storytelling even if you don’t understand each word.

In the early days of WWII, a Jewish boy is separated from his family, poses as a German orphan, is accepted into Nazi society where he’s celebrated as a “war hero” and eventually made a Hitler Youth. This movie, based on a true story, has a bitter-sweet touch of both drama and comedy, which ultimately culminates in a very unusual perspective.