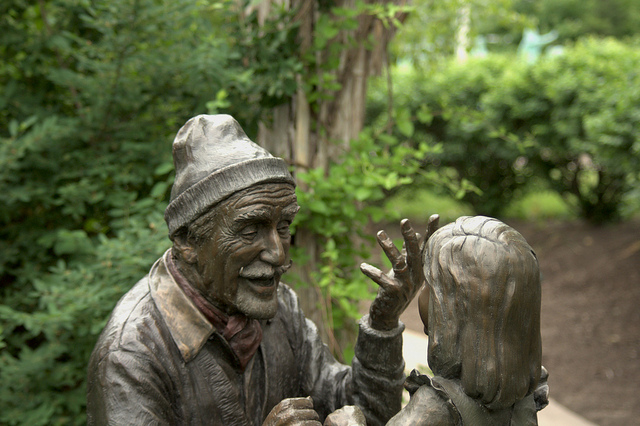 Some rights reserved by mikemol

There are many ways to learn or teach German, but my favorite approach is using storytelling. I can think of a number of reasons why learning German with stories is so effective, but the best one is this: because it’s fun! Learning a language can easily become a chore, so anything that takes your mind off the struggle while keeping you engaged is heaven-sent.

As opposed to the daily grind of conscious effort, by suspending our awareness of the fact that we’re learning a foreign language (which–let’s face it–is rather scary!), we can bypass mental blocks and make the process of acquiring new words so much more efficient and enjoyable. Have you ever had the experience of being so engrossed in a novel or a story that you completely forgot everything around you? That’s exactly what I’m talking about.

There’s only one catch: you have to find a story which is both simple enough to be understandable, i.e. appropriate for your current level, and interesting enough to keep you going. There should be enough new words, but not too many. Finding a story that meets both criteria is often easier said than done, especially at the beginner’s level.

Many people’s first idea is to take a look at children’s books, another starting point may be stories written in a special simplified German style, but chances are adult students will find these texts boring.

This is why in this article I’ve collected a few short stories which are not just manageable for beginners and intermediate learners but also simply great literature. Most of these short stories were written in the post-war era, because after the horrors of WWII many authors felt that their language, just like their homeland, was in desperate need of new beginnings and had to be freed from the remnants of pathos and ideology. As a consequence, these authors developed a new language which was characterized by simplicity and brevity. Put simply, they expressed themselves using simple words. This is what makes these short stories an excellent way to practice German.

Please note that these short stories, despite being rather accessible for literary texts, were not written for learners, and if you’re looking for German texts with a more guided approach, i.e. including translations of words, exercises, etc. check out our library or skip to the end of this article.

This German story is about a young man who has lost his home and family during a bombing. Through a remaining kitchen clock he remembers the care of his mother and understands his lost family life as a blissful state.

“Die Küchenuhr” is probably the most famous short story by Wolfgang Borchert and is often studied in schools in Germany to introduce students to the concept of Trümmerliteratur. It’s a remarkable example of how much can be expressed by using very few words.

Read an English translation of this story here.

Additional material: Quizlet to help you understand new words and practice vocabulary in this story.

In this story by literary Nobel laureate Heinrich Böll, a fisherman and a tourist exchange their views about life and “work ethic”. Written in the middle of the German Wirtschaftswunder (economic boom) in 1963, this short story was questioning the new-found prosperity but its content is timeless and more valid now than ever. There may be a couple of difficult words in here, so using a dictionary is recommended.

Read an English translation of this story here (PDF).

Slow reading by Get Germanized, an audio reading (starts at 0:30) via Wattenichsachs, or:

Written in 1958 this short story is about a man who goes to a job interview and gets entangled in the cogwheels of bureaucracy.

English translation of this short story not available.

Exercises around this story. (advanced)

More a parable than a short story, this story deals with a man who feels excluded from society due to his appearance and tries to convince people to accept him while walking through a city.

English translation of this story not available.

Written between 1945 and 1948, this short story by Wolfdietrich Schnurre is about a family fleeing through a barren landscape. Pained by hunger the family is looking for food, and when the father eventually finds a loaf of bred he is forced to evaluate his real motives.

English translation of this short story not available.

a short dramatic enactment of this story on Youtube (focusing mostly on dialogue).

Should the texts above still be too difficult, you can also take a look at my book Café in Berlin (Kindle / iBooks / ePUB) which is a collection of very short German short stories for beginners written in simplified German and supported by an extended dictionary and comprehension questions. This book is designed as a stepping stone to learning German with authentic literature.

Which short stories do you think are good for beginners? Write a comment!