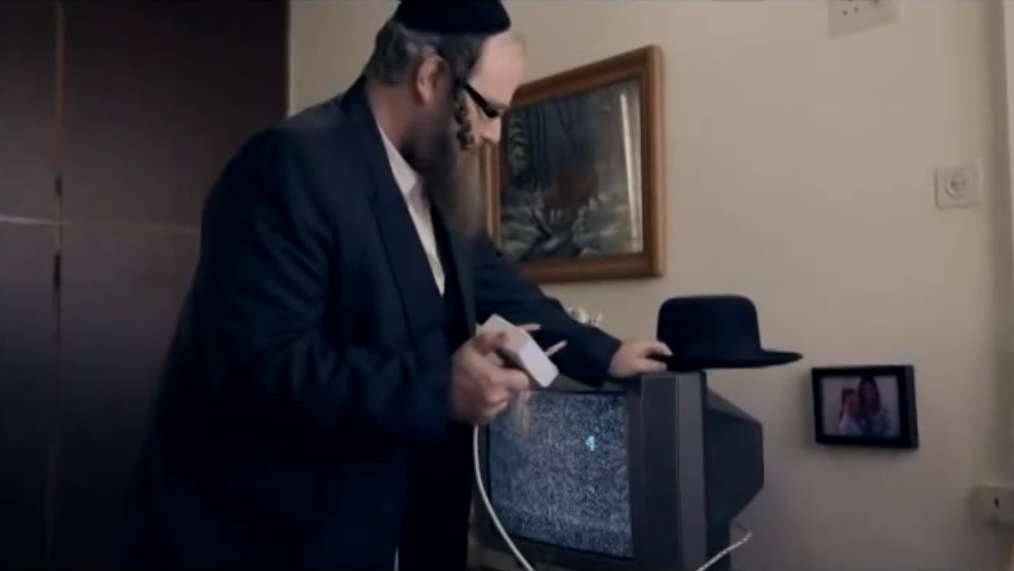 When I first started learning Hebrew, I used a very popular overpriced software which promised to make learning a new language simple and intuitive. But after a few days of clicking on colorful stock photos of smiling people and saying things like “the cat is under the table” over and over again, I began to feel like a simian lab rat.

So I ditched the high-tech language learning crutch, printed out the letters of the Hebrew alphabet, cut them out and glued them onto battered pieces of rough cardboard. Who needs flashcard apps anyway? Before too long, I had wrapped my head around these strange shapes and their sounds.

After a while, when I felt comfortable reading isolated words and sentences and conjugating a few verbs here and there, it was time to progress, so I did what I always do when learning a new language: diving head-long into movies and stories.

Since reading whole books in Hebrew (no vowels!) seemed a bit too challenging, I started out digging myself through the classics of Hebrew-language cinema. Admittedly, Israel is not the first country that comes to mind when thinking of great films, but there are some true gems, and I’ve done a little write-up of my top 10 Israeli movies. In addition to these movies, more recently I also enjoyed Once I was (2010), The Attack (2012) and Footnote (2011).

Some of these films are on Netflix, others can be obtained on DVD. As for subtitles, watching a Hebrew — or any foreign language film for that matter with English subtitles is good. But watching a Hebrew film with Hebrew subtitles is even better. The English subs help to get a preliminary feel for the rhythm and sounds, but in the end, foreign language subtitles are essential for any language learner, since they allow you to see syntax and morphology in action. Sure, you might end up pausing the DVD/stream every now and then, but it sure beats hunkering down over boring textbook dialogues with no payoff.

Suspenseful TV Series Made in Israel

Everyone these days is talking about the raging success of American TV series like Mad Men, Breaking Bad, House of Cards, etc., but did you know that the award-winning US series Homeland is actually based on an original Israeli TV series called Hatufim (Prisoners of War)?

I’ve seen both seasons with Hebrew subtitles (and pushing pause a lot, especially for the Arabic bits). In many ways the Hebrew original is a totally different experience, and it certainly helped beef up my Hebrew reading and listening skills. Besides, it’s just a story that keeps you on the edge of your seat, which is the perfect antidote to the daily drudgery of vocabulary lists and grammar sheets.

A few weeks ago, I stumbled over yet another great Israeli TV series which is incredibly different, not just from Hatufim, but from most acclaimed TV series today, since it manages to tell a great story in a subtle way, without the all too common staples of sex & violence. The series is called Shtesel or Shtisel (depending on your transliteration of שטיסל) and deals with a Haredi family in a religious district of Jerusalem.

Haredi is the Hebrew term for a group of people and a lifestyle which is usually classified as “ultra-orthodox” in the English language. Personally, I find the term quite amusing, because it seems as if whoever coined it ran out of of hyperboles. Ultra? Why not MEGA or GIGA?

But I digress. The Haredi people, of which there are many in Israel but also abroad, follow a very specific branch of Jewish tradition, which is very strange to most modern people in Israel or abroad. They wear a certain kind of clothing, have no access to Internet or television, and generally prefer to stay among themselves. A bit like the Amish, perhaps, but still very different.

“Another Side Of The Haredi Community”

Shtisel is by far not the first Hebrew TV series about Haredim, but it might be the first one that doesn’t solely occupy itself with surface characteristics of clothing and customs. While Shtisel makes a great effort to get all the details of the Haredi life right, the series does a great job of letting all of these things fade into the background and just tell a great story about human beings and their daily lives.

“I enjoy watching “Shtisel” because it shows another side of the Haredi community, which is not often reflected in the news or in popular depictions of their world — a side in which the Haredim are portrayed as people with all the emotional struggles and difficulties as their secular counterparts,” – a viewer

The pilot and the second episode of Shtisel are available on Youtube with Hebrew subtitles. A version with English subtitles is distributed by Go2Films. Here’s the trailer (UPDATE: the English trailer disappeared from YouTube, so here’s the French version instead):

Shtisel has won “Best TV Drama”, “Best Director”, “Best Script”, “Best Cinematograhy” and many other titles by the Israeli Academy Awards for Television 2014.

P.S.: As a German speaker I also enjoyed the occasional Yiddish dialogues between the Shtisel family members, since it’s basically a German dialect mixed with Hebrew words. Zay gezunt!