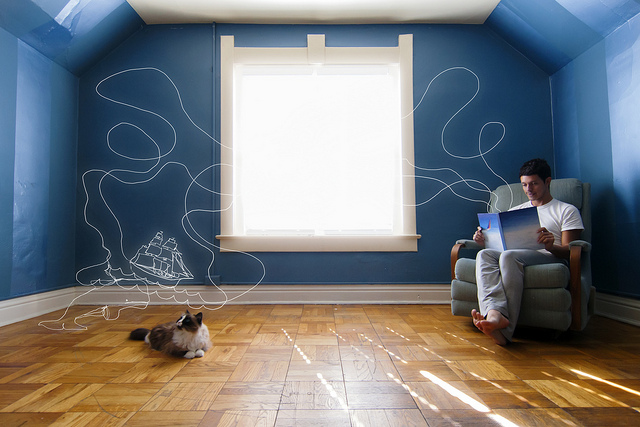 If you speak English, the world is your oyster, whether in business, academics, technology or on the internet. If you were born into an English speaking country, good for you. If not, you probably had to work hard to acquire the language, or are still working on it.

Most of my high school English teachers for example never really bothered to speak English with us beyond the obligatory practice sentences: “Peter vants a rebbit.” – “sing, sang, sung” – “Ziss is vonderful!”

We ended up learning a lot of vocabulary and grammar—bits and pieces, in other words—but we never acquired the glue that holds it all together!

My breakthrough in English happened when my family moved to Bangkok in 9th grade. The Swiss school I attended there had this American teacher called Mr. Adair. Apparently, when he wasn’t teaching us snotty-nosed brats he worked as a Hemingway scholar. Not only didn’t he speak a single word of German, but he had a teaching method unlike anything I’d ever experienced before.

In essence his approach consisted of two things: letting us watch the latest pirated Hollywood flicks in class (Thailand had a rather loose stance on copyright these days) and urging us to borrow books from his private “library”, i.e. a table cluttered with well-thumbed classics and other dog-eared paperbacks.

Outwardly this method didn’t look like much. And one can understand why the more methodically minded Swiss and German teachers may have scoffed at his approach. For when he switched on the television, he generally left the classroom for the rest of the lesson to seclude himself in the teacher’s room with cigarettes and black coffee, only to return seconds before the bell rang, wrapped in a cloud of tobacco and Java breath.

To his credit though no other teacher could have left the classroom and not have us explode in complete anarchy. It was only in English class that we sat silently like lambs, enthralled by the latest blockbuster.

With his “reading assignments” it was similar. The more books a student borrowed, the better her grades became, regardless of whether you had actually read them. And yet, many of us did. For me, it was the beginning of an English reading adventure which continues until this day.

From Gibberish To Glory

In Germany most movies are dubbed, so when I watched my first films in English I didn’t understand a word. The actors were speaking too fast, using words and idioms I had never heard before, their voices laced with heavy accents from Australian to Alabamian.

With reading it was even worse because there were no visual clues. When I went through my first English books, I understood only parts of each sentence. The rest was hovering somewhere in between vague hunches and complete gibberish.

And yet, I continued reading. Why? For a simple reason—I wanted to find out what would happen next and if I could make sense of it! It sounds so simple, but the mixture of suspense and curiosity can be a potent motivator. Learning languages is hard, after all. You have to take your motivation wherever you can find it.

Eventually, the books started making more sense. When I read through them a second or third time I often experienced a completely different story, because I had missed and misread many parts the first time and filled in the blanks with my imagination.

Fast forward to the present date. Speaking, reading and thinking in English have become second-nature to me. And if it hadn’t been for Mr. Adair, I’m not sure I’d be as comfortable as I’m today writing to you in English.

In the meantime I’ve become a teacher myself. I started out teaching English, French and Spanish to German teenagers, later German as a foreign language to adults from all over the world.

And, as some of you may know, these days I mostly focus on writing and publishing stories for German learners, because I know it just works!

Beyond my own dubious anecdotal evidence, there’s also some interesting research about what storytelling does to our brains. Did you know for example that reading stories has a direct effect on our brain chemistry?