Kindle & Co: Between The Revolution and Degeneration of Reading Ebooks

The first ebook I ever saw (it was at the end of the 90s) was one of these “How To Make Money Online” schemes. It came with all the obligatory gratuitous images of bank notes, long sales letter including “social proof” of how Anne and Herbert became millionaires by following the “three step guide” and repeated oversized “buy now” buttons, not to mention a 3d-mockup of the “book”, which in fact was just a flat pdf.

I always wondered who would be so stupid to give these people money for their hopelessly overpriced publications. Even if the content of these dubious electronic books was beneficial, who would actually read a book on a computer? It seemed so counterintuitive.

From The Gutter To The Stars

Somewhere around this time I also discovered the Gutenberg Project and its hundreds of freely available classic novels and plays. Downloading a text file that contained Goethe’s Faust I wondered what to do with it.  I certainly was not going to read it staring into my pre-TFT era screen. To the surprise of my friends, I started consuming these pieces by letting a computerized text-to-speech voice read them out loud. To cover the uncanny effect of listening to a lobotomized virtual “Sam” or “Harry”, I put some Brian Eno ambient music in the background. My friends thought I had gone crazy, listening to the slaughtering of one classic text after the other, its broken limbs and innards insufficiently bedded in “music for airports”.

Fast forwarding to the year 2012: ebooks have shed their dreary past of cheapskate schemes and clunky delivery. They have become a fixture of contemporary culture, although I still don’t know when exactly the ebook stopped being something you wouldn’t mention in public, and started becoming a serious alternative to dead-tree reading.

For me, at least, it was with the discovery of e-ink. The main drawback of electronic reading had always been the glare. With e-ink, even though the words were rendered on the “page” not by ink but by circuits, the feeling was comfortably unlike staring into a desk lamp.

But the further the ebook makes its foray into our homes, minds and hearts, a new generation of Luddites is fighting its advance. 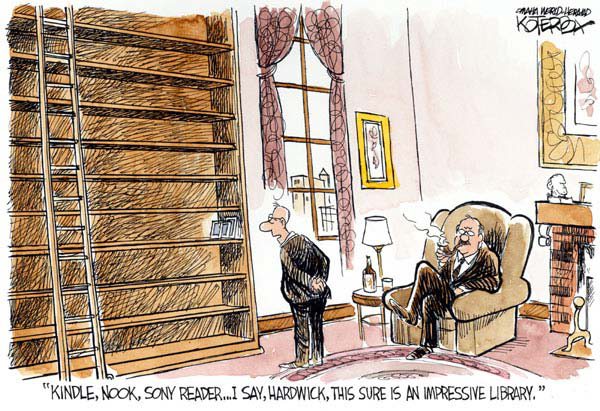 Whether it’s articles by Jonathan Franzen claiming that ebooks are “damaging society” or those worrying about an ebook-induced memory-impairment, the criticism is rising parallel with Amazon’s ebook sales.

Speaking about Amazon and ebook criticism, I’ve been following a blog called “The Kindle Monologues” for the last few weeks whose purpose is to collect and address the complaints of e-reading critics worldwide, its tagline saying: “I’d rather read books, than whine like a child with a skinned knee, about formats, and what constitutes a “real” book.”

Surprisingly, the arguments of ebook critics are highly redundant:

Here’s a link to the entertaining rebuttal of these and more by the Kindle Monologues. Reading and thinking about this, it seems that a lot of ebook critics are in fact not as interested in the actual reading as in the secondary effects such as being seen as a literary person, touching and smelling, etc. Here’s a telling quote from the article:

More posts about: books, ebooks in Books,Lifestyle
« 6 Tips For A Modern Study Space
Has Content Curation Become A New Creativity For The Masses? »