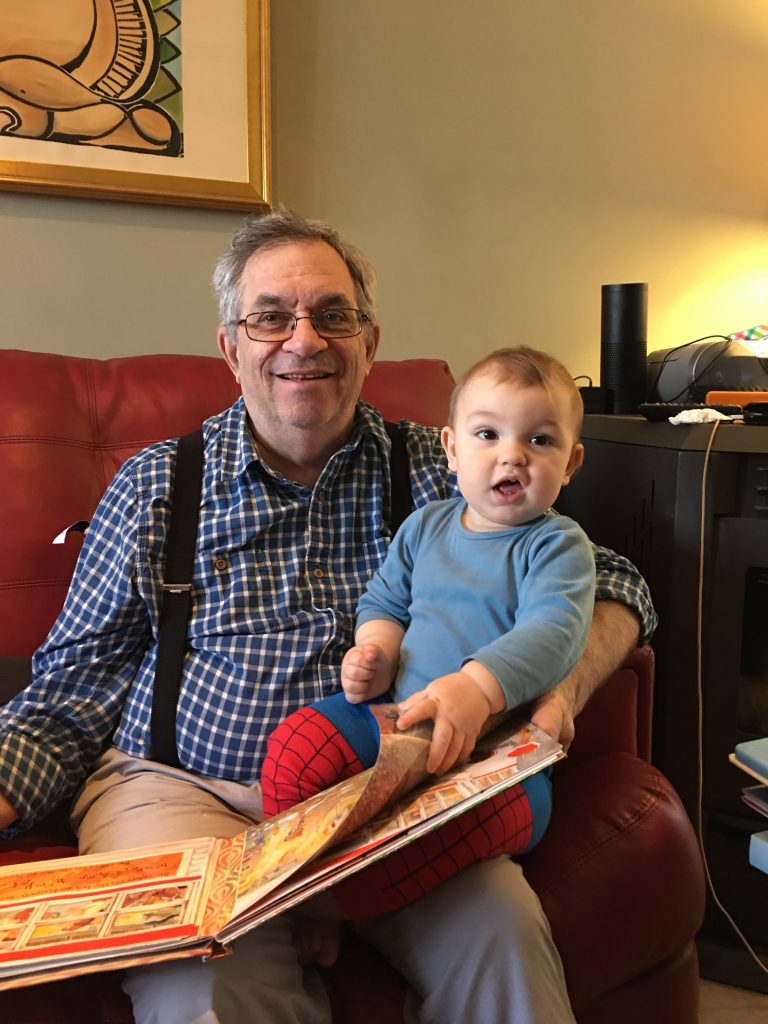 Monte and his Austrian grandson Leon

After talking to the German learning group from Sioux Falls, I’m happy to share with you another interview today. Meet Monte!

In the late 60s he took some introductory courses in college, fell in love with the language, but through the course of a busy career and family life his skills gradually declined. Being a true New Yorker he maintained his proficiency by “slightly assaulting anyone” whom he heard speaking German in the subway.

Then, as he says, “in one of those twists of life” his daughter moved to Vienna, got married, and started raising a child. Monte has visited Vienna multiple times since and found ample opportunities to practice his German.

However, he also experienced a common problem of German learners everywhere, because he found that locals speak English so well that they “shift languages as soon as they hear my fumbling.”

You mentioned that you first started taking German lessons in the 60s. What was it that fascinated you about the language? In short, why did you pick German and not Italian or Spanish or something else?

I had an extraordinary French teacher in 9th grade, Mr. Harry Levine. He inspired a love of languages in me. I continued studying French as a minor through college. I planned for a semester of study in Neuchatel Switzerland in the spring of 1968. To prepare for the trip I also signed up for three college German classes which I loved.

These were still the postwar years and coming from a Jewish family, German was a suspicious language (even through my parents dabbled in Yiddish). I enjoyed being the rebel. After my semester in Neuchatel, where I learned that the only people I could understand were other international students who were taught classical accents, I embarked on a summer of travel. I wanted to experience the “Prague Spring.”

My plans were changed when someone stole my money in a youth hostel in Brno. My options were either to return to the US or travel to Berlin and find Auslaender work. So I worked in an AEG Telefunken factory and stayed at a youth hostel in Fehrberliner Platz. My only friends were a group of Arab Auslaender co-workers. So this Jewish boy had a serious peace initiative with Arab youth right there in the heart of Berlin.

Back in the US I became a school teacher in the South Bronx where I had to pick up some Spanish.

Would you say that learning German has changed your life?

What do you find most difficult in learning German?

It seems I have a natural gift for pronunciation according to M. Levine. I invariably get compliments on my accent. However gifts are sometimes accompanied by curses. I have a great difficulty with oral comprehension. Always have and always will, I suspect. I became a Buddhist in 1970 and believe there is some deep meaning in this curse. Because of it I never desired to live a wannabe French (or German) expat life. Instead I’ve built a truly wonderful life here in America. In addition, now that I’m a septuagenarian I find that learning vocabulary is VERY difficult. I never remember having had this challenge when I was younger.

Which resources and tools do you use on a regular basis?

Right now my two major tools are your books and Google Translate. The latter is a great resource for practicing. I use the “G-Board Keyboard” Android app when I text out to French-German-Spanish friends and study the translations that are produced.

If there’s one thing you’ve found most effective on your learning journey, what was it? Talking to natives perhaps? Or watching TV in German?

No, German TV is too advanced to my ears unless it’s subtitled. Speaking to natives is difficult–they know English so well that they prefer switching languages over hearing my fractured attempts. Speaking German to sales clerks and waiters is extremely helpful. They are being paid to be patient and polite and I practice a bit with Google Translate before I speak. Also, learning lyrics to songs is enjoyable and productive. I love the old French chansons (Piaf, Dutronc, etc.) and right now I’m plowing through a bit of Die Dreigroschenoper. Strange, isn’t it?

Is there perhaps anything else you’d like to share with our community of German learners? Any special tips or suggestions?

Time is always of the essence!! We all have very busy schedules. How do people manage to squeeze in time for language study?

Thank you for the interview.

Are you learning German, too, and would like to be featured on our blog? Write an email to [email protected] including a photo, a bit of background about yourself, why you’re learning German, what parts your struggling with, and which tools/resources you find most helpful.

in German,Language Learning
« 11 Yiddish Words in German And Their Ancient Hebrew Origins
These 5 German Cakes Will Make Your Mouth Water »