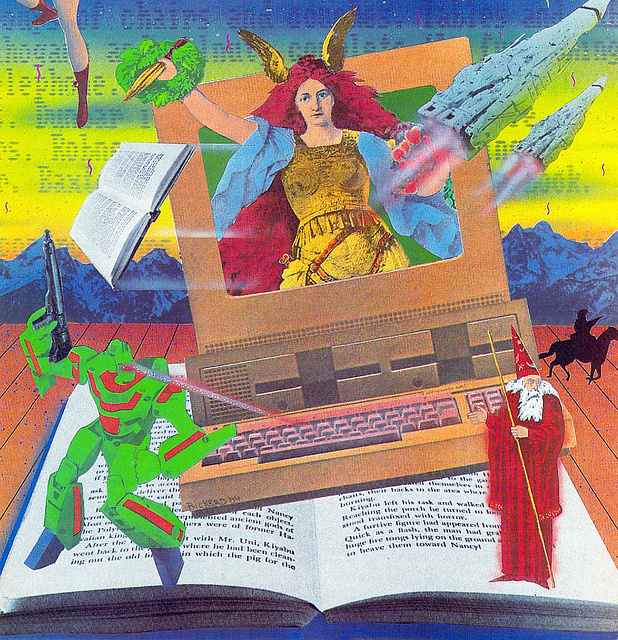 A Brief History of Gamebooks

Gamebooks (“Spielbücher” in German), or “choose your own adventure” books, as they’re often called, were all the rage in the 70s and 80s. The idea was simple: to create a book where the reader can influence the story by making choices along predefined paths. In some ways, gamebooks can be considered the predecessor of point-and-click adventure games. And now, in the age of ubiquitous computing, they’re making a comeback on our desktops, ereaders, tablets and smartphones, aided by crowd-founding platforms like Kickstarter.

A gamebook is a work of fiction that allows the reader to participate in the story by making effective choices. The narrative branches along various paths through the use of numbered paragraphs or pages. – Wiki

There is much to be said about the history of gamebooks. Interestingly, the idea of branching narratives first appeared in the 1941 story ”The Garden of Forking Paths” by Jorge Luis Borges, in which a fictional author creates a story with nine possible endings. It was only in the late 50s, however, that the concept of gamebooks was applied to actual texts. And while we mostly associate gamebooks today with fiction genres such as fantasy, sci-fi or mystery, the first gamebooks were actually educational in nature.

Pioneered by American behavioral psychologist B. F. Skinner, the idea to use gamebooks in education was an appplication of “programmed learning”, a method of self-study using machines or interactive books:

Students choose from multiple-choice answers and then are prompted to proceed to another page of the book depending on their answer. If a correct answer is given, students move on to another page with more information to learn and more questions to answer. An incorrect answer leads to comments on why the answer is incorrect and a direction to return to the original question to make another selection. – Psychology Encyclopedia

In a sense, the educational gamebook is the grandfather of self-study apps such as Rosetta Stone, Duolingo and other interactive forms of computer-supported language-learning. By using gamebooks in language learning, we can get both the benefits of interactivity and the immersion of delving into a foreign language narrative, identifying with characters, engaging in authentic dialogue, etc. In short, if done right, gamebooks combine the fun of video games and storytelling to boost reading, vocabulary and grammar competencies.

There aren’t yet many gamebooks out there specifically designed for language learners, but since gamebooks alternate short text passages with actions, they can be a good entry-point to reading authentic literature.

Where to get good German Gamebooks?

While many of the classic German gamebooks (often translated from English) such as Fighting Fantasy are out of print, the Lonely Wolf (German: Einsamer Wolf) series, for example, is still available to this day on Amazon and other stores.

Not all German gamebooks were translations, however. In 1996 German game designer Wolfgang Kramer created a mini-series of two gamebooks which mixes puzzle elements with branching narratives.

In the first volume, for example, the protagonist/reader is incarcerated in a palace, and by solving puzzles of various kinds, he ventures deeper into the palace and eventually tries to escape. The second volume takes place in a pyramid, where the goal is also to first discover the secrets of the pyramid through logical puzzles and then to escape at the end. The two books are called:

These books seem to be out of print, but I’ve seen both the first and the second book on the German Amazon and Ebay as second hand editions. Another series of German gamebooks (6 volumes) was created by German fantasy author Markus Heitz, released by Pegasus publishing, and takes place in two of his previously established universes: Die Zwerge and Ulldart.

Many of these books are available through Amazon.com, Amazon.co.uk, and other stores. Last but not least, another noteworthy German gamebook creator is Jens Schumacher. So far, he has released 12 German gamebooks, split into two separate series: Alpha 2 (sci-fi, 4 volumes) and Die Welt der Abenteuer (fantasy, 8 volumes): Alpha 2

Since these books are all relatively new, they can be easily obtained on Amazon.com, Amazon.co.uk and other international stores. Some of these books are also available as Kindle edition, so you can take them along on your smartphone, ereader, tablet, etc.

Free online Gamebooks in your browser

If you’ve never played a (German) gamebook before and just want to have a little taste before you order a full book, I recommend a visit to ifdb.org or spielbuch.net where you can play German gamebooks for free, in your browser. After selecting a book, look for the link that says “online spielen” or “play online”. These playable German gamebooks were created by regular people, not professional authors or publishers, so quality may vary. But it can be fun to dig around in the archives. There are even a handful of bilingual German-English adventures, e.g. “A dark place of mind“.

When you play a German gamebook on your Kindle or in your browser, you can easily translate difficult words by using the Kindle dictionary or a browser extension. Keep in mind though that these books often use archaic words and expressions mixed with fantasy names and locations, and are therefore often a bit difficult for beginners or intermediate learners.

A Fantasy Trilogy for German learners

To make the fun of language learning through gamebooks more accessible, I’ve created a simplified gamebook series designed for German learners using easy language, an on-page dictionary and a “combat system” designed to teach grammar and vocabulary. The books are available as Kindle editions, ePub, paperback and as a free web-app edition.