False Friends: 5 German Words That Don’t Mean What You Think They Do

German and English are both Germanic languages, so they not only share many grammatical features but also have a lot of similar words. For example, when you know English and you hear the German word “Haus” you immediately know what it means: house. The spelling is different, but it sounds exactly the same!

Similarly, a “Freund” is a friend, “Sand” is sand, “grün” is green, and so on and so forth. And as it happens when two languages are very close, there are also many words which seem the same but mean completely different things.

Gherkins in Your Face 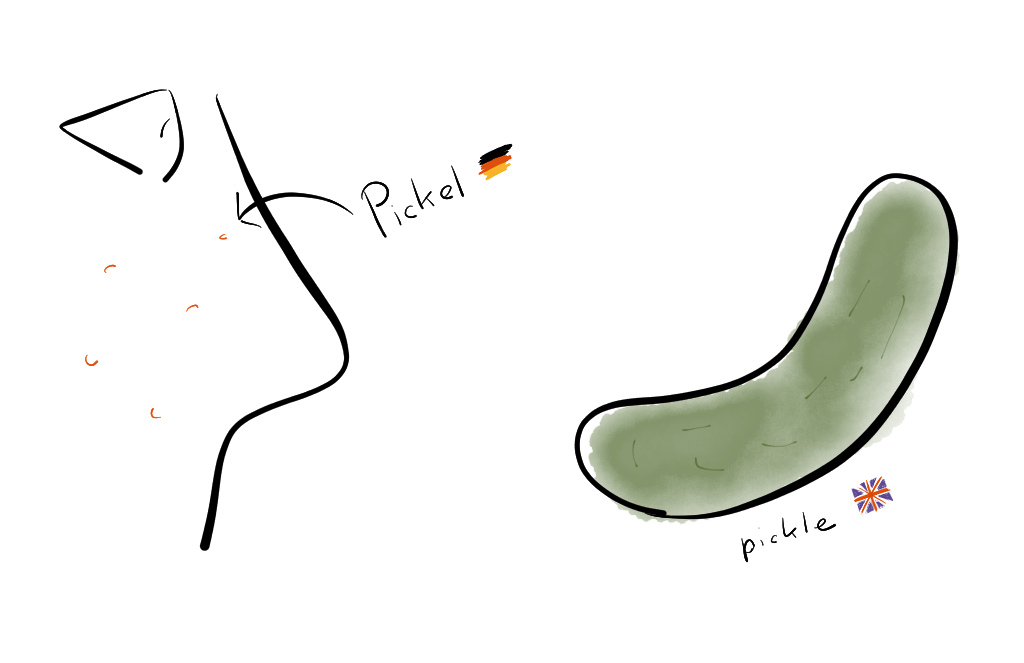 When you walk into a store in Germany and ask for a jar of “Pickel (m)”, don’t be surprised if you get strange looks. You just asked for a jar of pimples. Yummy!

The words sound exactly the same, even the spelling is nearly identical. However, the correct German translation of the English word “pickle” is “Gewürzgurke (f)” or “saure Gurke (f)”.

So, the next time you see an ad for “Anti-Pickel” creams, rest assured. People aren’t supposed to apply it to their food, but to their face!

Higher Up The Food Chain 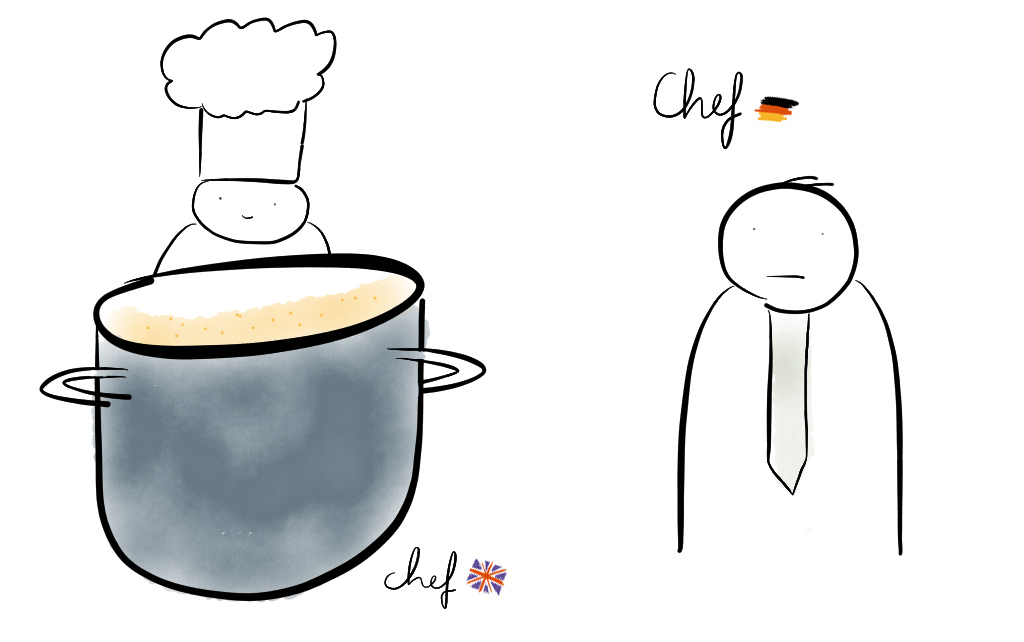 You’re in a restaurant. The food is either incredibly good or unbelievably bad. At any rate, its quality diverges enough from the blandness of average that you’d like to have a word with the “chef”. The waiter complies with your request, and minutes later a man walks up to your table. But before you can ask why he isn’t wearing his white hat and apron, you realize that this man isn’t working in the kitchen. He owns the place! He’s the chief, head of staff, manager, leader, call him whatever you like, but he’s higher up the foodchain than your average mess sergeant.

Put simply, the German word “Chef (m)” simply means: boss. The person who does his magic in a kitchen is called “Koch (m)”.

NOTE: There is also the German word “Chefkoch (m)” which means “head chef”. But the idea is the same: the German “Chef” refers to a position in a hierachy, not an occupation.

Where Your Clothes Come From 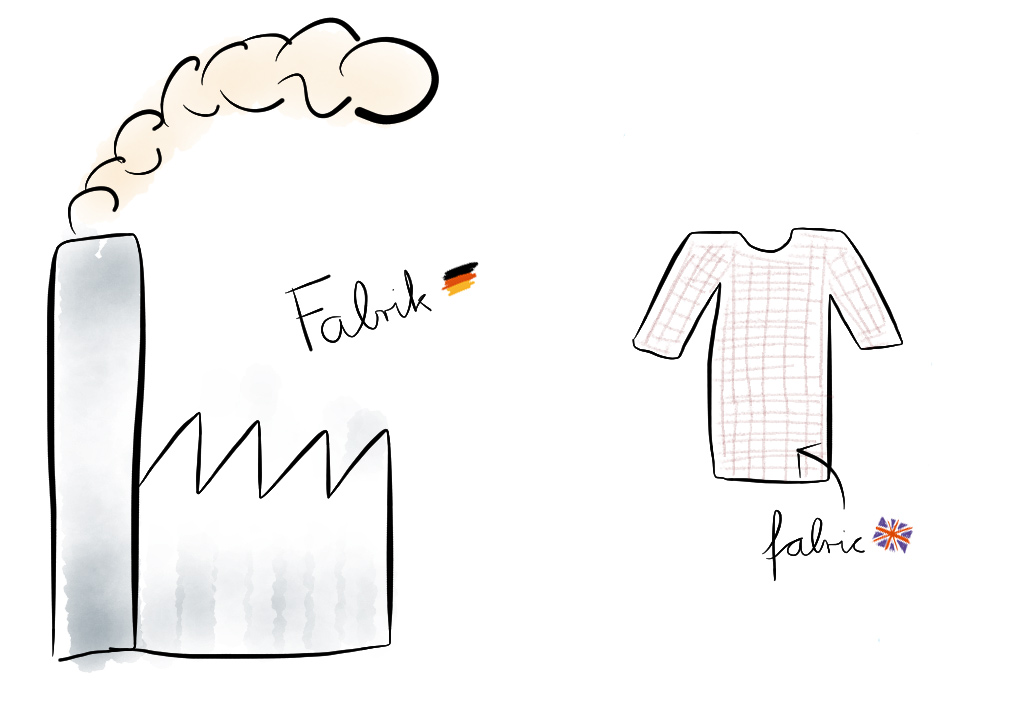 Another confusing German word is “Fabrik (f)”. English speakers stumble over a word like “Baumwollfabrik (f)”, and — assuming they know that “Baumwolle (f)” means cotton — the conclusion is simple: it must be cotton fabric!

However, the German word “Fabrik (f)” means something totally different, namely: factory. Thus, a “Autofabrik” would be a car factory, a “Wurstfabrik” a sausage factory, a “Baumwollfabrik” a cotton factory, and so on.

In short, a “Fabrik (f)” is a place where things are fabricated. If you want to talk about textiles in German, the correct word is “Stoff (m)” or “Gewebe (n)”. So, in our example above, cotton fabric would simply be “Baumwollstoff” or “Baumwollgewebe”.

Pump Up The Volume 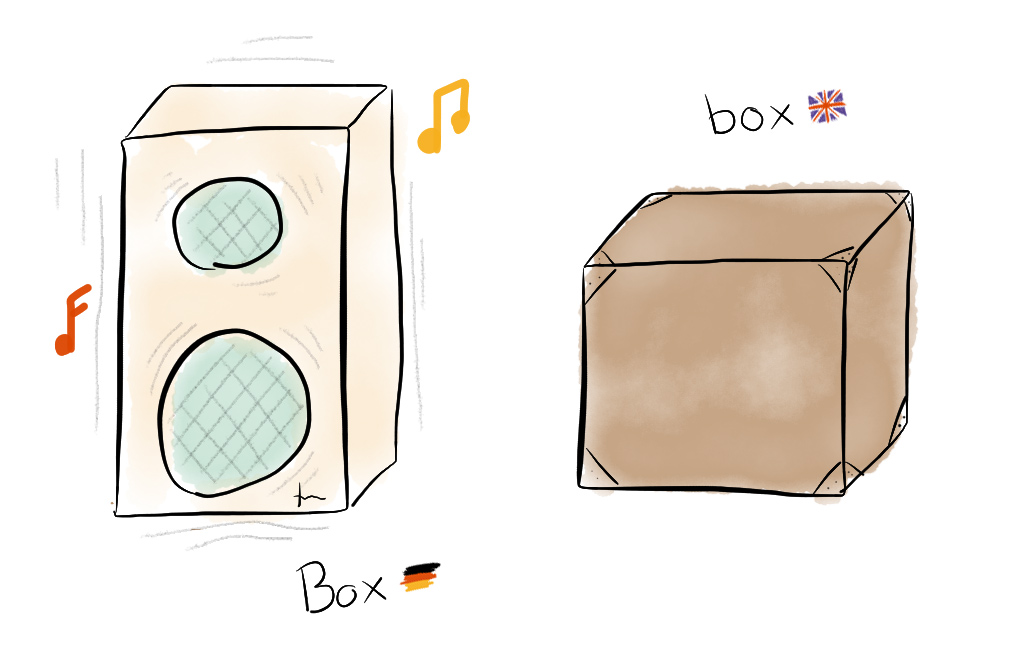 Imagine, a friend invites you over and offers to show you the new “Box (f)” he bought. A box of what? While you’re still wondering where it is and what’s in the box, he pushes a button on a remote and your question gets knocked from your lips by the subwoofer.

It’s one of these German words like “Handy (n)”, which refers to a mobile phone. It seems like it’s an English word — and it certainly once was — but the German language gobbled it up and changed it beyond recognition.

Thus, in German, a “Box (f)” is nothing more than a loudspeaker. (Since they come in pairs, you’ll often hear the plural “Boxen”). It’s a shorthand for “Lautsprecherbox”, the first part “Lautsprecher (m)” being a direct equivalent to the English “loudspeaker”.

Floozies In The Air 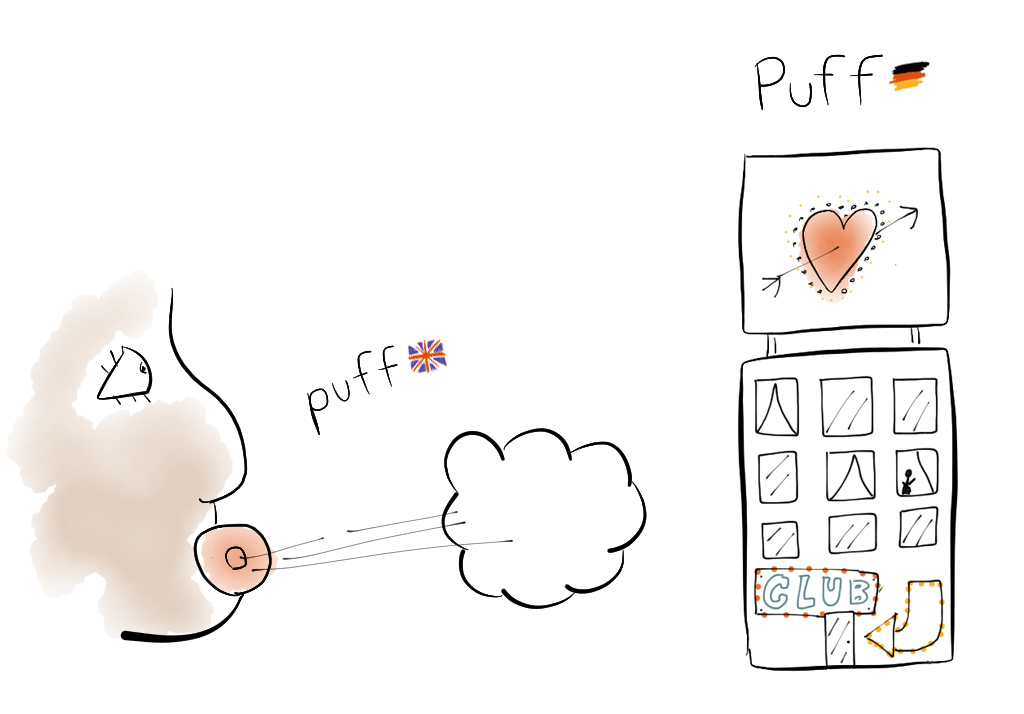 Once upon a time there used to be a rapper called “Puff Daddy”. Allegedly he took on the moniker because he used to “huff and puff” and get angry, so friends called him Puffy.

In Germany however, the name “Puff Daddy” always had a slightly different ring to it, because there’s a word in German which is spelled exactly the same way: “Puff (m)”. The pronunciation is a bit different, in that the vowel of the German word sounds like the “oo” in “foot”, but that’s not the only thing which is different about it.

In short, a “Puff (m)” in German is a brothel, cathouse, bordello, a den of iniquity — however you please — not a “short, explosive burst of breath or wind” (although these gasps may indeed be commonplace in aforementioned establishments).

Therefore, caution should be exercised when talking about “puffing a cigarette” or a “puff of wind. There is no one-size-fits-all translation. The German verb “paffen” refers to the activity of indulging in tobacco products, while the noun “Zug (m)” (from “ziehen” – to pull) would refer to a “puff” from the former. Hence, a “puff of air” would be a “Luftzug (m)”, but “huff and puff” is best translated as “schnaufen und keuchen”.

BONUS: A GIFT TO REMEMBER 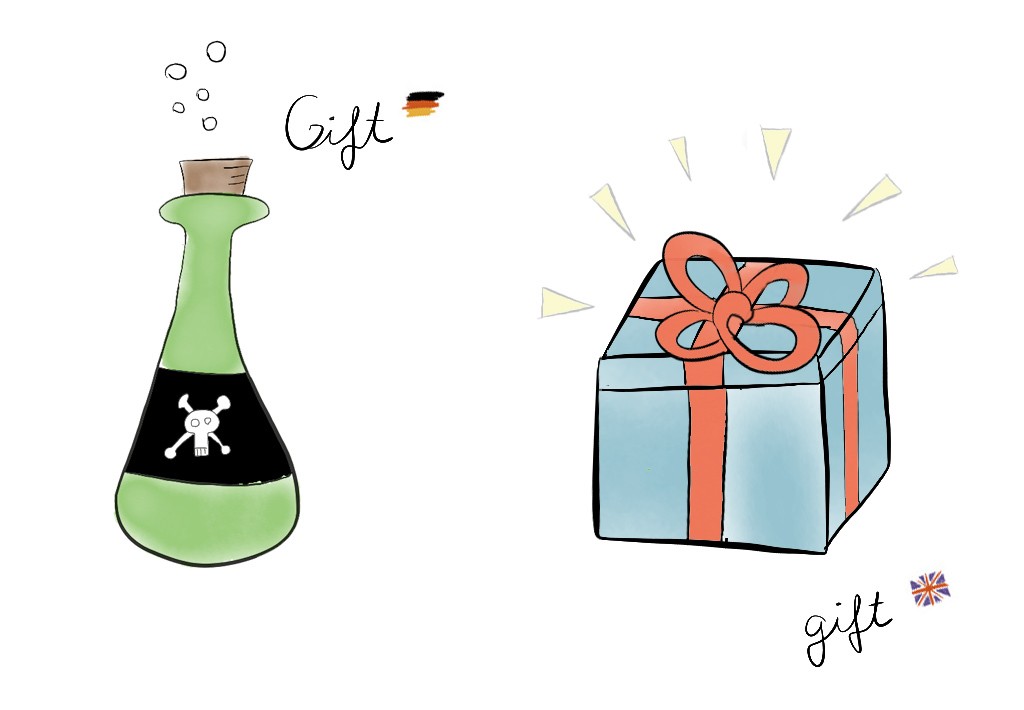 When a German tells you he’s got a Gift for you, don’t rejoice too soon, especially if it comes in a dubiously marked bottle. Similarly, when you’re invited to a wedding in Germany and ask what gift to bring, choose your words wisely, unless you want to treat the nuptials to a deadly sip of strychnine or arsenic.

These are just a few of false friend for English German learners. Which ones did you come across in your own studies? Tell us in the comments!

More posts about: German in German,Language Learning,Learn German With Text
« Streamline Your Podcasting Workflow With Auphonic Audio Post Processing
Rachel Boyce: Technology has enabled me to interact with my students like never before »