Should German Learners Use Google Translate?

When Wikipedia first became popular I remember my teachers and professors scoffing at it: “A free encyclopedia? On the Internet? Why, that can’t be good! You had better learn to use the library instead, young whippersnapper!”

And yet everyone still used it. All the time. Was (or is) it perfect? Of course not. When it comes to in-depth research nothing beats expert literature. But depending on how you use it, it can be an immensely powerful tool to look up quick factoids or get a general overview about complex topics.

I feel similarly about tools like Google Translate. Language teachers often try to dissuade students from using it, because it can make horrendous and often funny mistakes. Take the following for example, which still hasn’t been fixed: 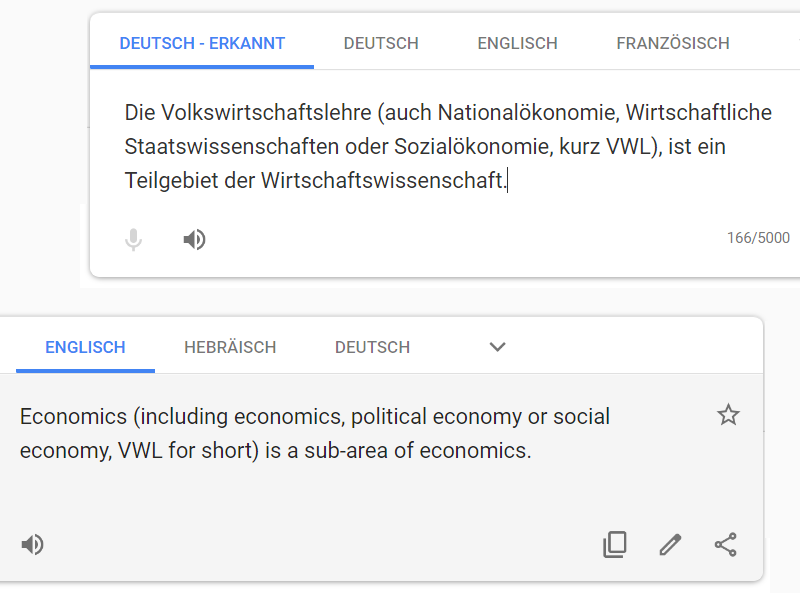 So economics is a sub-area of economics. Got it? Well …

Do these misshaps prevent people from using it? Nope. Human beings will always use tools that make their life easier. And while Google Translate is still far from perfect, machine translation is getting better and better every day.

So the question is not whether you should or shouldn’t use it, but how and when.

Making Sense of Walls of Text

When you come across a German news article as a beginner and just hit “translate”, the learning effect is virtually zero. Sure, you may have gotten the gist of the article, but you missed out on a chance to practice your existing knowledge and extend it.

Even if you switch back and forth between the original German and the English and nod knowingly, it can be easy to mistake the seamlessness of machine translation for your own text comprehension skills.

This is also why I don’t offer complete translations in my books, because when you first read a chapter in German and then get the translation in English served on a silver platter, it’s just too tempting to skip the (often frustrating) effort to parse the German altogether or just do it half-heartedly. It’s like presenting a hungry person with a freshly baked pizza on the one hand, and a bunch of raw ingredients (flour, tomatoes, etc.) on the other. Guess what’s more atractive?

So, if you’re not in “study mode” and just quickly need to get the gist of a page, just click “translate” and you’ll get passable results. But if you really want to make progress with your grammar and vocabulary, don’t auto-translate the whole text! Here’s what you can do instead:

In this case you’re using Google Translate like a dictionary (there are better alternatives, by the way). But what if the sentence still doesn’t make sense?

While this process does involve more effort than just auto-translating the whole text, you’ll notice that over time it will lead to gradual increase in skill. If you take short notes while doing this process, it’ll be even more effective. Note down new words you’ve learned and strange grammatical phenomena you’ve identified. Keep a log or journal and revisit it regularly.

Letting The Machines Write For You

Next, let’s look at how you can use tools like Google Translate when composing your own texts. I won’t tell you to never use it, because I know you will use it anyway. Here are a few tips how to use it judiciously to assist you instead of blotting out your own efforts.

Let’s say you have to write an email to your employer or to a governmental institution in German. Scary, right? You don’t want to make any mistakes, so why not just write it out in English and then let Google do the heavy lifting for you?

Contrary to what I’ve said about reading, I don’t think this is necessarily an altogether terrible idea, because it will provide you with a basic structure for your letter in German.

But! And this is a big one. You should never use machine-generated German in your letter which you don’t understand, regardless of how elegant it may seem. That means that you’re going to have to audit each and every generated expression and construction carefully.

If you find something that seems strange to you, try to rewrite the English, translate it again, and see if you fully (!) understand the resulting German? No? Try again. There are so many different ways to say the same thing, that you’ll find at least one variety which will make sense, even if it uses simplified grammar.

Having said that, if the letter is important, please don’t rely on Google alone, but have a friend or acquaintance read it over before you send it.

To summarize: if you use Google Translate as a writing assistant, try to write and re-write your English original in such a way that the resulting German is on par with your actual knowledge of German, i.e. restrict yourself to using only words and grammar you would actually use yourself when speaking.

This way you’ll not only expand your awareness of varieties of expression but also gain insights how machine translation works (depending on different combinations it’ll come up with wildly different results).

Just to reiterate, I obviously don’t recommend to always use Google Translate when writing your own texts (see here for more advanced tools). But if you must use it, please use it wisely.

A Contender For Google’s Crown?

Since I’ve only mentioned Google Translate so far, I also would like to point out another machine translator called DeepL Translator which is being developed by a German company in Cologne (“Kölle alaaf!”). DeepL often provides better results when dealing with the intricacies of German than its competitors.

According to the test of multiple German news-outlets the results of DeepL are more natural sounding, less prone to error and more aware of certain nuances. I’m not affiliated with them by the way, just think it’s a cool service.

DeepL is available as a free standalone program for Windows, Mac, and Chrome extension (discontinued). But you can also just use it directly on their website.

Do you use machine translation in your daily language learning routine? Let me know!