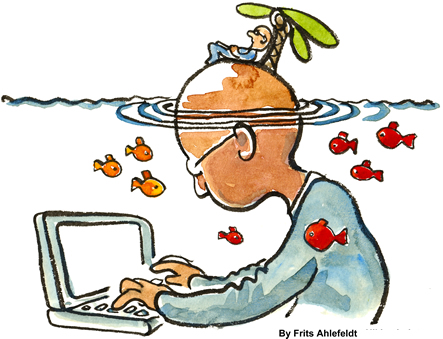 Recent studies show that the brain can only focus on two given tasks at the same time. Also, those tasks mustn’t be too distinct.

We are in fact very limited.

But it doesn’t stop us from doing too many things at the same time like talking on the phone while driving a car, drinking coffee, playing with the navigation device, listening to music and shifting gears, or does it?

Where did the Road Go?

Did it ever happen to you that you got distracted by an incoming instant message or a popup notification so completely that you totally forgot what you were doing at the moment? (We won’t tell anyone if you say yes.)

It happens to be the best of us.

And it’s a guarantee for becoming agitated and unproductive.

As I’ve suggested here and here, it’s not impossible to stop the habit of being constantly distracted in the name of “keeping tabs” on too many things at the same time. But it takes time. And discipline. Lots of.

And Deliver Us from Uncontrolled Multitasking…

Every once in a while, there comes along a little piece of software promising to help us in our daily struggle against the lifestyle of distraction.

WriteMonkey is such a software. It’s free. It’s simple. And it promises one thing and one thing only: Distraction-Free Writing.

I’m writing this article on it, actually.

It’s just an almost black (super-dark green) screen with olive letters. Yes, it does remind of early computing terminals and has a nice side-effect of nostalgia and if you like you can even enable typewriter sounds. There’s nothing like that satisfying ding after hitting Enter, is there?

But don’t be mistaken. This is not a clumsily put-together toy with zero substance:

If you pop the hood you can change any of WriteMonkey‘s gazillion settings from obvious stuff like font-settings to more complex options like character-sets and jump masks.

Customizing until the Cows Come Home

Here are a only a few of the many awesome features:

A Serious Software For Serious Writers

While writing this review I looked a bit deeper into the options that WriteMonkey has to offer. And this is what you have to do as well if you want to use it to its fullest extent

In other words: WriteMonkey is a simple but serious software for serious people who have only one goal: getting good writing done.

That doesn’t mean that you can’t use it just for fun, enjoying the rush of typing. And in this respect I would recommend WriteMonkey to everyone who would like to write but feels difficulties to get started: It’s a matter of practice, sitting down everyday and just writing. So it’s a good exercise to just start writing without bothering about the outcomes at first. In this respect, WriteMonkey is a perfect training tool, as well.

My experience with it is very positive so far and I’ll continue using it for now. In many ways it’s not WYSIWIG and feels like a step back into archaic times before graphical user interfaces, so it does take some time to get used to.

But it does deliver. It’s good on the eyes. Formatting has never been more hassle-free. And contrary to most Office softwares it actually motivates you to write!

So far WriteMonkey is only available for Windows. You can download it here. It doesn’t need an install.So it’s completely mobile. If you’re on a Mac you should check out WriteRoom by Hogbaysoftware, instead.

Let’s say goodbye to distraction and step into the zone!

For more helpful tips about distraction and productivity check out these resources, as well: