Code or Die: The Future Of Work? 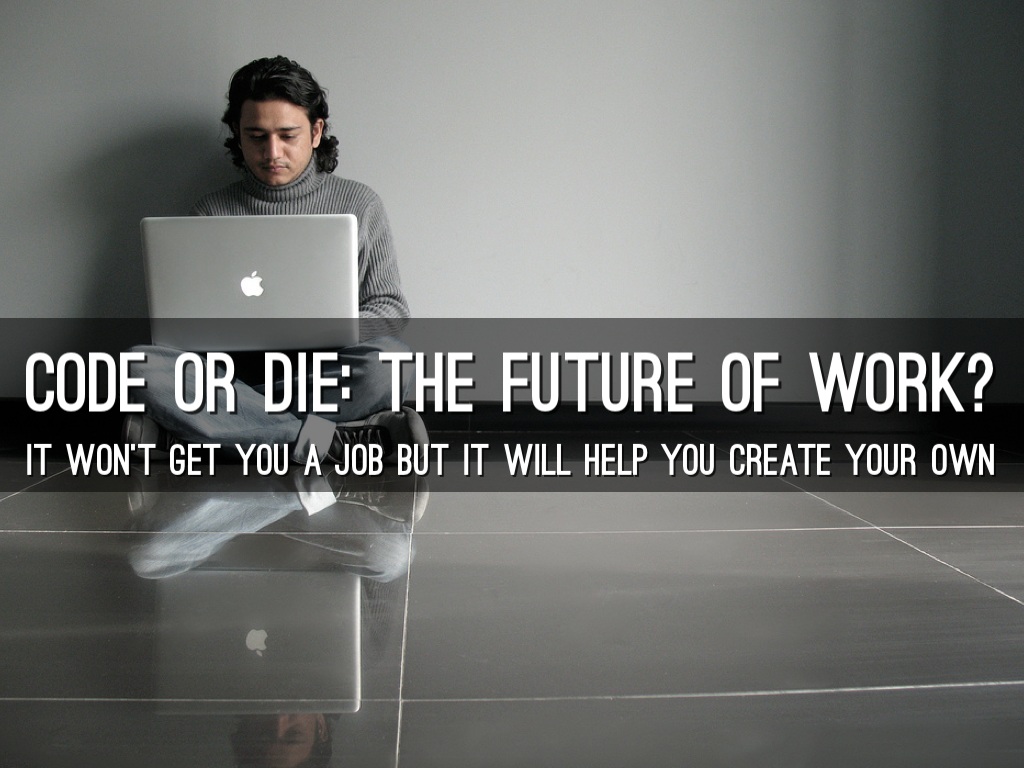 In a new video designed to spread awareness about the importance of teaching people how to code, big promises are being made. Backed up by talking heads such as Zuckerberg, Gates and many more, the basic premise is that coding is the core asset for tomorrow’s job market. “Want to enjoy the colorful offices and prestige of working for a company like Google or Facebook? Then get off your rear-end and sign up for a programming course.”

1. Coding Is Not Magic (Not Really)

“The programmers of tomorrow are the wizards of the future. You’re going to look like you have magic powers compared to everybody else.“ – Gabe Newell, Founder and President, Valve

Everyone loves to play little games on their iPhone, chat with their friends or watch funny YouTube videos. We usually don’t think much about the code behind these applications, we just use them. We’re happy if we manage to keep up with Facebook’s frequent changes and remember all our passwords for various sites and services.

Do we experience software as magic? Usually not. But when we see a person who is able to scroll through pages of numbers and strange symbols and transform this chaos into beautiful apps and games, it does seem a bit magical to most of us, doesn’t it?

The third law of Clarke says that “any sufficiently advanced technology is indistinguishable from magic”. Does that mean that our own technology is too advanced for us? Why is there such a huge gap between users and programmers? Do we really need to know how a software works in order to appreciate it?

While these questions are all up for discussion, there’s one thing that’s for sure: learning to code is not a magic pill to get into Silicon Valley.

2. It Takes Much More Than That

In a brilliant critique of the campaign, Kirsten Winkler urged us to take a look at the people in the video.

“They are not just code monkeys, they have other interests and skills they are able to use in their free time. Like the band that jams in the office. People who get the high paid jobs have many more skills than typing “if then else” phrases. They are foremost creative and can solve problems on their own.”

One could define coding as a way of looking at problems and finding creative solutions. In that sense, learning to code might help you solve problems in everyday life, but there’s also the danger of spending too much time coding, puzzling over badly documented APIs and fixing bugs by talking to a rubber duck.

In other words, having the capacity to be obsessed with logical problems is no guarantee for a well-paid job. We might just become nerds who – besides being overly intellectual and obsessive – are also severely socially impaired.

Like Kirsten pointed out, instead of just advertising coding as a magic ticket to Shangri La, we should promote learning everything it takes “in order to become a well rounded person”. Working for a highly demanding tech company requires more than just a knack for talking to machines. While basic knowledge of programming is a great thing to have, skills such as team working, leadership and a general capacity for interpersonal communication might prove to be much more important for landing that dream job in the end.

3. Coding Might Be Essential To Creating Your Own Job

Now that we’ve talked about how learning to code is in no way a straight fix to becoming an employee, let’s look at the other aspect. As pointed out above, many of the people depicted in the video are entrepreneurs, individuals with great ideas who built something of their own.

And if we don’t look at the future of employment, but at the future of self-employment for a moment, learning to code is indeed an asset which is difficult to underestimate. Most successful tech start-ups started with one or two people who actually built something. And yes, without being able to code, they couldn’t have built it.

But not everyone has to create their own tech company. The Internet has allowed people to work in ways which were simply not existing just a decade ago. While for each person that succeeds there are always many that fail, we see more and more people who make a living online by producing videos, writing blogs, teaching languages, selling books, handicrafts, music, etc.

One could argue that in order to do that one doesn’t really need to know anything about coding. In theory anyone can upload videos to YouTube, make a Skype call, register a free blog and spread the word through Twitter and Facebook.

Learning to code won’t get you better ideas, but it will help you apply them directly. Whatever you can code yourself as an entrepreneur, you don’t have to pay for – plus, you get to choose exactly what your website/application/service does and how it does it. Learning to code (even if just a little bit) gives entrepreneurs an edge over those who use pre-packaged solutions.

Learning to code is no magic bullet, but if you work on the web, it’s an ability as essential as reading and writing. It’s true that it can be intimidating at first, but there are a million ways to start, and one should always remember that the code itself is not important, it’s the ideas behind it that matter.

More posts about: coding, employment in Lifestyle,Online Business,Technology
« Your Brain On Storytelling: 3 Reasons Why Stories Help Us Learn Languages
How Not To Learn German Quickly »