A Book That Was ‘No Book At All’ 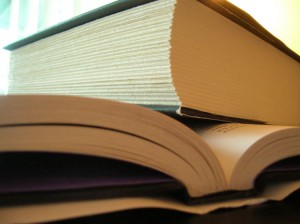 Once upon a time, a book was published which, to some people, was “no book at all”.

This is how the story goes:

In 1969, the author Idries Shah retold the ancient legend of a man with a big book that contained only very little writing and people who were very upset that it contained so little. The re-telling of this story (which is more than 700 years old) occupied around nine pages with ca 1500 words. Mr. Shah put these nine pages in print, added 300 blank (!) pages to give it the impression of being a big book, and to top it off put it in a gold-embossed cover.

The book was called “The Book of The Book”.

What do you think happened after its release?

There was a public outcry, of course!  People wanted their money back. They complained to the publishers.

Only later, a book describing the defining characteristics of “a book”, written by the UNESCO, convinced the British Museum to accept it.

Telling this story to University students the author quotes a related study done with rats where one group was given cereals to eat and the other group were fed only on the cardboard box containing the cereal. The study concludes: “that the box cardboard is often more nutritious than the cereals inside.”

What Is a Book?

Aside from the entertainment value of this whole story, I think there is a renewed interest in those matters since the growing popularity of the eBook, Twitter and digital modes of writing in general.

As an example, there is a UK-based Twitter account that set to summarize the bible with “one tweet per chapter”. The Biblical prose has to be largely whittled down to fit in 140 characters, of course, yet the project seems very popular (at least statistic-wise, boasting 19,426 followers while following only 91.)

Projects like these have fostered the understanding that the role and function of written text has fundamentally changed.

William Gibson put it like this:” it’s all Google-able, so when people read books now they Google unfamiliar terms”

What used to fill a lot of space in the pre-Internet days was listing facts, indexing bits of information, etc. In many cases you had to pre-suppose that if you didn’t directly attach specific information between the covers, you’re readers wouldn’t be able to or have great difficulties to access it, if they weren’t living somewhere near a good library.

To clarify how this has changed, I recently released a book about Online Teaching which contains a more or less straightforward way to get started making a living by online teaching. And yet, I left out all technical details, for the simple reason that it would take too much space and be outdated quicker than you can say “Google”.

Interestingly I found another book with the somewhat shady title of “How To Teach Online (and Make 100k a Year)” on Amazon. One of its reviews (none of them too flattering) said :“the final third of the book is a list of schools that offer online programs, which any google search will give you (with much more updated information, to boot).”

So, back to my own publication: Had I included all the technical stuff from registering for a Skype account to editing WordPress Themes with Conditional PHP statements, the book would have come to be at least 1000 pages.

Now, it’s “only” 68 pages long, but minus all of the stuff that you could easily find on Google.

Is it still a book?

Yesterday I stumbled over an interesting definition:

“The book — by which I mean long-form text, in any format — is not a physical thing, but a temporal one. Its primary definition, its signal quality, is the time we take to read it, and the time before it and the time after it that are also intrinsic parts of the experience: the reading of reviews and the discussions with our friends, the paths that lead us to it and away from it (to other books) and around it.”

While this “non-physical” way to describe a book might come somewhat closer, it is somewhat abstract and I wonder if a time-based definition fully exhausts the value of a book?

There were endlessly boring (and in longterm meaningless) “long-form texts” I had to read in University which took a lot of time to read and caused me great deals of pain. Then there were great short stories which I read in just a few minutes but they’ve continued to generate insight and understanding over years to come.

Although it’s common practice among empiricist and a central part of “scientific method” not all forms of value can be quantified.

So, no matter how many pages a book has or how long it takes you to read it, it’s important not to fall prey to any kind of presupposition, no matter how attractive it may sound.

source of the publishing process of “The Book of The Book”: A Perfumed Scorpion

More posts about: book, ebook, publication, publishing, twitter in Books,Indie Publishing
« Why Parents and Educators Are Epically Failing the War on Cyber-Bullying
Where Democracy Goes to Die… (Coming Soon To A Country Near You) »