In 2010, Latitude asked children from all over the world aged 12 and below about their hopes, wishes and expectations about the Internet and technology in general.

The results are surprising, not just because the kids were asked to draw their ideas in colors but for the ideas and paradigms they reveal. Here are just a few insights from this study.

1. Tearing Down the Walls Between Online And Offline 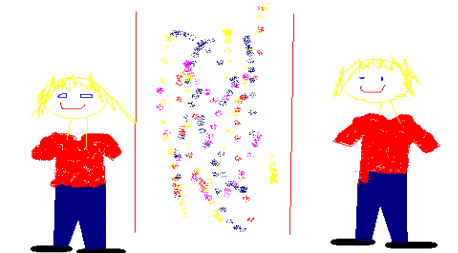 Children of today don’t seem to share their parent’s distinctions of “real life” and “online life”, of offline and online.

In the Latitude study they created and requested technologies that allow them to:

Boundaries between mediated experiences and so-called direct experiences seem to be disappearing. Kids want their offline experiences to be augmented by online technology and vice versa, not just reaching through the screen but tearing it down completely and fusing the two worlds into something new. And I’m reminded of that William Gibson quote again:

“The other thing I think about about our grandchildren, is I think is what they’ll find quaintest and most old-timey about us is the distinction we insisted on making between the socalled real and the virtual.” 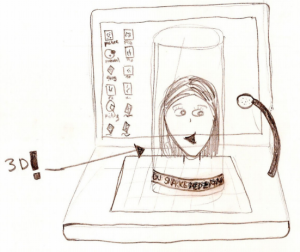 Mouse and keyboard are rather ancient technologies that have only recently begun to be replaced by the more intuitive touch-screen of the smartphone and tablet. And these developments seem to be according to children’s wishes for they want to be able to communicate more intuitively with their gadgets.

Touchscreen and verbal/auditory interfaces are only the tip of the iceberg. All in all they want computers and devices that are more human and more like themselves such as robotized companions and interactive holograms.

As the researchers point out, this reveals a growing trend of abolishing the gap between user and technology and replacing it with an understanding where the device is seen as “merely an extension of oneself.”

One third of the children foresaw a future where the Internet would increasingly connect them to other children and enable them to learn important skills such as learning a foreign language or cooking.

Beyond that they envisioned whole websites for collaborative creativity, allowing them to draw, design and create everything from fashion up to whole landscapes.