You’re The Alien! How Learning A New Language Gives You A Radically Different Perspective on Life (If You Let It…)

When I lived in Bangkok for four years, I often found myself stuck in the sprawling megacity’s notoriously bad traffic, staring out at the bustling sidewalks, and there was a certain recurring sign that never failed to catch my attention. It said: “Marriage for Alien“.

Despite knowing better, I always imagined an almond-eyed couple with big green heads, exchanging their vows in a language filled with strangle warbles and clicks before zipping through the sky in their retro-chic flying saucer, spelling out “just married” in the wake of their electromagnetic exhaust.

And now, almost twenty years later, living yet again in a strange foreign land which is not my own, this time in the Middle, not the Far East, I realize that these notions of extra-terrestrials are actually not a far cry from the true expat-experience. 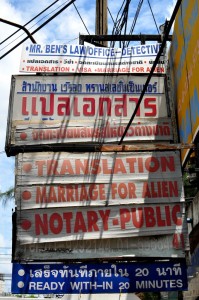 When you live in a place that speaks your language, where cultural customs and unspoken rules are the same you were brought up with, there’s generally not a lot of friction with the environment, except for the usual minor annoyances of finding a parking spot, delayed trains, etc.

But when you’re a stranger in a strange land even the tiniest part of everyday reality can be cause for discovery or dissonance. Learning a new language, trying to find your way around bewildering customs and unspoken rules — I’ve often compared this to the situation of a child: everything is new and presents an opportunity for learning. What this simile doesn’t take into account however, is that the adult expat or migrant (what’s an expat after all, but a “white, rich migrant?“) has a whole different system of language and culture already ingrained in him, which may often be at odds with those of the new environment, hence the image of the alien or extraterrestrial seems far more fitting.

It’s part of our nature as human beings that we experience psychological discomfort whenever our expectations don’t line up with reality. For example, when the weather forecast predicts sunshine and we suddenly find ourselves in a downpour without an umbrella, it’s not just getting wet that makes us uncomfortable, but the fact that reality seems to deviate from our expectation!

Like I said before, usually these moments don’t occur that frequently in our lives, but when you’re learning a new language and culture, cognitive dissonance becomes the modus operandi. For example, a native English speaker doesn’t expect nouns to be gendered, but the German language genders everything threefold. Dissonance! In the West we expect to read our words from left to right, but in Hebrew or Arabic they’re flying at us from right to left. Dissonance!

Why don’t more people learn a foreign language or live abroad for extensive periods of time? Very simple, because it’s uncomfortable. To hark back to our initial image, it essentially turns you into an alien! You will act, sound and look strange — even if you try to assimilate, it’s hard to hide your true nature.

The comfort zone and the extent to which one is willing to step out of it varies with each individual. We are, after all, creatures of habit and comfort. However, I believe that learning to become more comfortable (!) with increasing levels of cultural and linguistic strangeness may just be the biggest benefit of learning a language!

Sure, it’s nice being able to watch a foreign movie without subtitles or order an espresso or a falafel like a native, but ultimately, language learning is so much more than just a functional improvement; it allows us to grapple with deep internal discomfort, in the process of which we may perhaps become just a little bit more forgiving of ourselves and others, because as weird as “they” may seem, we may be even weirder.