Why Facebook is Not the Internet or: The Difference between Leading and Cheerleading 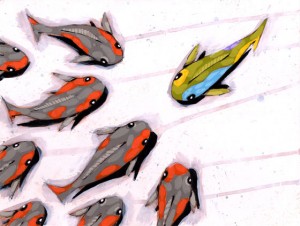 Where my last post about the Spam known as “Social Media Marketing” was targeting the side-effects of digital socialization very broadly, today I want to take a closer look at one platform in particular: Facebook.

My latest book talks about Social Media beyond the platform-specific in order to keep its half-life above the 2week mark and the insights beyond the Twitter vs. Facebook “debate” which is slowly turning into the new “Mac vs PC”. Since this is a blog post, however, let me get down to the nitty gritty today and break up the well-balanced debate with some polemic judo:

Tim Ferris, guru of the “New Rich” and those “Becoming Superhuman” who was an early investor in Twitter and owns shares of Facebook once said in an interview that:

While that may at first sound like a straightforward statement, there’s more to this than meets the eye. Here’s problem number one:

The majority of people on Facebook are not computer nerds or even people with particularly developed knowledge of technology, although ironically, it was built by exactly those, the socially awkward with over-firing left brain capacities.

The normal everyday users on Facebook are people like your aunt from Arkansas and that ex-hippie uncle who emigrated to South Africa, years ago. Not mentioning all the aspiring cheerleaders and other high school acquaintances. The stuff that matters to them is posting family reunion photos, sharing the occasional article of “righteous indignation”, galleries of (drunk) friends at parties and – of course – cute animal pictures. (There are exceptions, of course. But the graph shown here, says it all. ) Think about it: The book, in Facebook does not refer to reading in the same way a Yearbook doesn’t read like Shakespeare.

While basking in the glow of warm and fuzzy social feelings, pinched with occasional bursts of envy or “schadenfreude”, the masses’ experience of the Internet is becoming more and more “Facebook-centric”.

“Take Me Where the Sun don’t Shine”

If you know a tiny bit about the history of the net or the times before Facebook, you’ll be able to see that the way Facebook works is not the way the Internet works, although Zuckerberg and Co. are trying hard to convince us of the opposite:

So, no matter what marketing departments and self-inflated people tell you:

Facebook is just another website or service built on the infrastructure of the Internet. It is not the Internet itself.

The real “pipes and plumbing” of the Internet will always be the unglamorous and infinitely boring (to most people) specifics of software and hardware.

The moment where you mistake Facebook’s vision for the true nature of the Net, things are going to get messy.

Now, let’s come back to the quote above, based on all we’ve discussed so far, how can you possibly gain a “driver’s license” for the whole Internet, just by using Facebook?

In other words: How will driving a bike with support wheels on a training course possibly prepare you for the murderous Spaghetti Junctions of the world?

First of all, the concept of educating people how to use the Internet better is good. But calling it “driver’s license” is just a mistake. It is  a common fact that we can always describe the new only in terms of the old. But “internet driver’s license” will probably go the way of “information highway”. Nowhere, that is. A computer is not a car, thank you.

Probably the only thing that is true in Ferris’ statement is that Facebook “is very well positioned.”

We know that Obama and Zuckerberg have been very busy rubbing shoulders, lately.

But are they really bringing the “change”, making people “more connected” or rather positioning themselves in the narrative?

Instead of taking a position of:” Hey yeah, let’s tame the Internet, de-anonymize it, make it “family safe” and tell people that this is all there is.” – maybe we should be trying to educate people to cope with the increased alienation and culture of distraction which is an obvious by-product of digital socialization.

I know it’s hard but imagine turning off Facebook for a day. Imagine deleting your digital persona. After going cold turkey…

What would you miss?

What would you gain?

Sarah Byerley for example, experienced the following after her abstinence:

“Instead of spending excessive amounts of time on Facebook, I was finding new, more interesting blogs to read and frequenting the NPR Music homepage. I was also going to bed an hour and a half earlier every night. […] Further reinforcing the positive nature of this life change, barely anyone had even noticed my absence from the site.”

Taking the reverse approach, what does being on Facebook actually give you? How does it augment your life?

Does it give you access to information you wouldn’t otherwise be able to get?

Does it help you to be more productive?

Does it allow you to do more effective research?

Does it encourage you to be more creative?

Or does it just help you to – well …  “position yourself in the narrative”?

image by the insanely talented Ric Stultz. Go and buy all of his prints!

More posts about: facebook, online living, Social Media in Lifestyle,Social Media
« New Religion Claims: “Copying is Holy”
Logging in to Log Off: Non-Mediated Nostalgia and the Point of No Return »