The Practice Of Not Knowing: A Third Method Of Foreign Language Learning 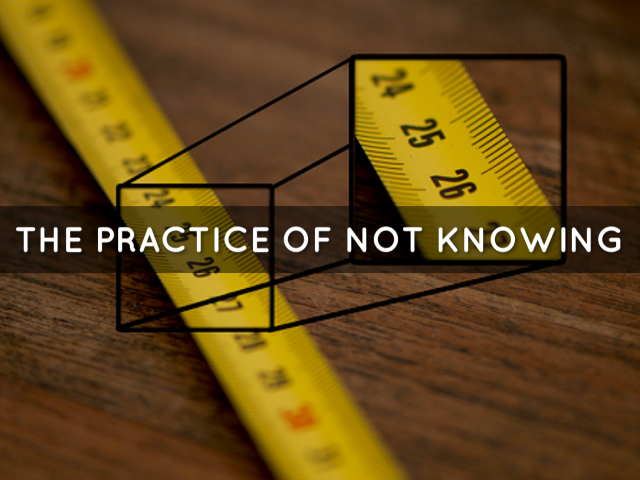 Knowing something usually doesn’t take a lot of effort. Either I know, or I don’t. It’s the process of committing something to memory which is the difficult part. For example, once you’ve learned that the past participle of the French verb “vivre” is “vécu” – you know it. But how did you get to know it? And how do you keep from forgetting?

Let’s isolate this moment of knowing for a second, that instant after we have committed something to memory, before the (often) inevitable happens and we forget.

If I know that the Hebrew alphabet has 22 letters, for example, then this information is stored somewhere in my cerebral cortex. It’s like a hard-drive of a computer. Once it’s in there it stays in there, until it gets retrieved, updated or accidentally erased (forgotten). If I don’t access this information, however, it just sits there, waiting for the natural erosion of memory.

In other words, the actual knowing is completely passive. Knowledge may be power, but only as a potential. It could be true that in some cases “rote learning” might be the fastest way to learn irregular verb forms of a new language, but there’s always the danger of a kind of semantic satiation (excessive repetition leads to loss of meaning).

2. Talent Is Not A Substitute For Practice

Let’s face it, we’re not all equal. There are people who are naturally better at certain things than others. Some have a natural disposition towards maths and science, others towards language and arts. But when it comes to learning, we all have one thing in common: the need to practice.

For example, when I was working as a language teacher for children and young adults, one of my assignments was to determine individual weaknesses and “patch up” holes. And what I found was that bad grades were never just bad grades. There were those students who worked very hard but foreign languages just didn’t come naturally for them. And then there were those with great natural abilities or even talents for (foreign) language learning, but they simply lacked the practice.

In other words, practice can make a mediocre learner better. But without practice even a good student doesn’t get perfect.

Learning a language is like learning an instrument. It’s not enough to just know your scales and modes, you have to practice every day. Practice is not about thinking or “figuring something out”. It’s about doing it. Then doing it again. And again, and again…

3. The Art Of Not Knowing

All of the above should be nothing new to the seasoned learner. In language learning each person has their own ratio of knowing vs. practice, based on their own natural disposition. There is another component, however, which is not often talked about: not knowing.

Many people who are beginning to learn a new language want to know everything as quickly as possible. We want to be able to express ourselves as fluently in the new language just as in our mother-tongue. We want to progress fast beyond the awkwardness that comes with being in new social contexts where we don’t understand everything. In short, we’d like to avoid the pain of not knowing.

But there is no shortcut here. Not knowing can not be countered by sheer brute force of learning by rote. We cannot skip this stage of feeling like a helpless three-year old when first trying to understand foreign speakers around us. And even when we finally begin to understand them, our contributions to the conversation will feel like clumsy crayon drawings. There’s no way we can go from “zero to hero” and bypass the stage of not knowing.

It can be practiced, however. We can relax into not knowing and use it as a drive. The first step is to recognize that not knowing is not a bad thing. It’s working in our favor. Not knowing is at the beginning of every learning process. Not knowing is what allows a child to display innocent curiosity where adults only show disillusion and cynicism. Not knowing is what makes even the experts humble, because the more they know the more painfully aware they become of what they don’t know.

We tend to think sometimes of not knowing as a problem which knowing will fix. True learning, however, never completely eliminates not knowing, it just grows into it. Whenever we have learned something new we learn about something else which we don’t know, yet. In that sense, not knowing is not just the absence of knowing. It’s at the beginning, middle and end of every learning process.