The Internet is not a Mass Medium. Or is it? 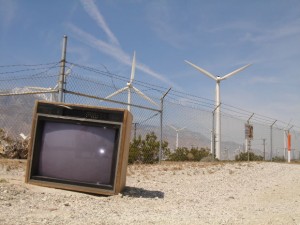 The term “mass medium” was coined in the early 20th century and referred to magazines, newspapers, radio & television broadcasts.

I remember the times when watching an MTV music video on color television fried every teenager’s excitement-circuits, slouched in front of the silverscreen, sucking up the newest trends and fashions through the straw that was the other end of the “dictate of cool”.

The majority of people were passive consumers.

The Internet has changed all that. Or has it?

We pride ourselves individually and culturally for our technological inventions. Handheld computers and mobile computing technology have become what cars used to be: An almost guaranteed (but expensive) way to buy yourself into a circle of friends.

A 1000 $ shiny smartphone with all the newest hardware, gadgets and apps is the equivalent of a Rolls Royce you can put in your pocket and flash whenever your social confidence is running low. “Hey you see that dude! – He’s using the new BlahPhone 5.5.”

In the same way jaws of the 50ies and 60ies could be dropped by turning on your car’s radio or push-button retraction of your convertible’s roof  you are now King of the Hill by the use of your gadget: Ruler of Information. Infinitely powerful. Popular without limits. Just push a button!

It seems to be a rule that we always use the latest technology in the consciousness that produced the previous one.

In other words: We’re lagging behind our own inventions!

Whereas Television stations like MTV were the ones who decided what went on air and what wasn’t cool enough for their standards, now everybody can simply record a video, upload it and potentially reach millions.

It’s all about content. It doesn’t matter who you are, how old you are, where you come from, your hair color, etc. If your video hits a nerve, people will share it and you will get a lot more exposure than on any local “talent show”.

Now, here’s the funny thing: Although everybody can do whatever they like on their video you will find a lot of content which is trying to be like the Television we used to know. Think talking heads. Close-ups. Making faces for effect. In short: camera-conscious sets of behavior. (Yes, people do act differently on camera! It doesn’t matter whether you’re a professional actor or the child behind your dad’s home video lense)

There are for example millions of videos that are supposedly about “language learning”. What do you see? Right: Talking heads. Painted fingernails. Brushing back hair. Eyes staring into camera. A sense of unspoken “Hi Mom. I’m on TV.” or: “How do I look?”

This is where you have the rift.

Youtube might allow anyone to record and upload his own videos. But it’s not like TV. Not at all. The age of camera-conscious (“how do I look?”) monologic broadcasting is over! There are millions of boring videos that show people sitting in their bedrooms doing “videocasts” – droning on and on about how they feel, what their opinion is, why they feel this and that should be such and such.

Most of those people haven’t understood that putting your face on camera doesn’t give you any credibility, at all. Alright, there was a time when a video of a person’s face sent signals of success, expertise and popularity. But those times are gone.

The Internet is not a video-based medium (like TV)! It’s nature by definition is multimedia. Combining all forms of media in a creative way!

Being the “cool kid” today is not what it meant yesterday. Simply copying the standards of the past is on the one hand quite natural, yet it’s a sign of our technological immaturity: We have only taken in the outer tools but not the inner paradigm shifts that came with it. Although you might look very cool from the outside, you’re still living in the past.

In order to have an edge, you need to be willing to take an unflinching look at the way our world has changed and how we can adjust ourselves appropriately. Here’s an entry point:

Sketching out the Skeleton

There’s lots more to say about this, especially the last point.  In my eyes, the most important change is that the human being is becoming the center of attention. Treating your audience like mute cattle that are being force-fed by the content you selected won’t work. Treating people as cogs in an political or economic machine won’t work either.

The economy of the future will be based around the human being, not around the company which creates products and services but around the needs of those who come to you. It’s about flexibility, tolerance, understanding and collaboration.

The communication of the future is not linear!

Communicate to your audience, customers, clients in an open way – you win. Treat people like passive receivers – you lose.

Oh, you’re still here! Thanks for reading that far! What do you think about all of this? leave a comment if you like or share this article with your friends. and no, this is not an automated message. 😉

Have a great Day!