The German Prefix “be-” Explained 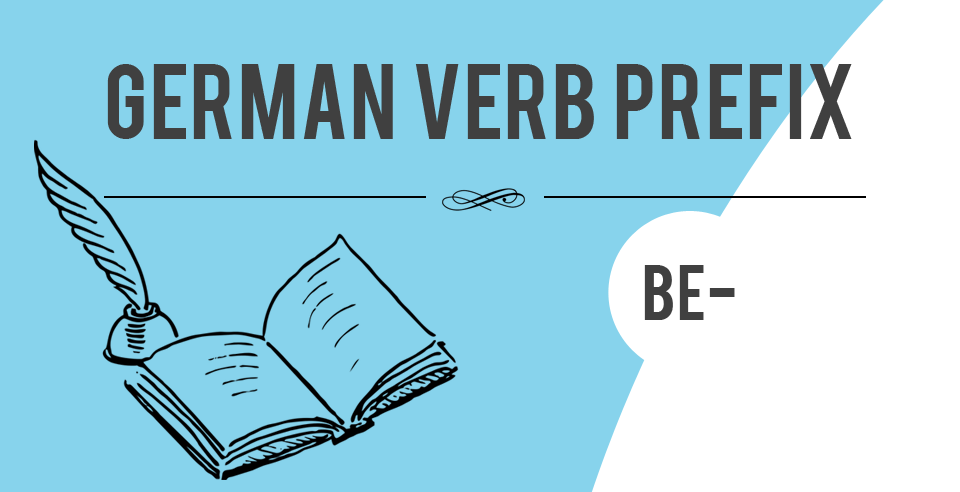 Once you’ve started learning a few German verbs, you’ll notice that there are a number of awkwardly similar verbs which have a slightly similar yet sufficiently different meaning. I’m talking about those pesky German verb prefixes which sometimes are just two or three letters long but completely change the meaning of the verb.

Let’s take the verb gehen (go/walk) for example and look at how adding prefixes can change the meaning:

weggehen – to go away

vorgehen – to go ahead

(These are just some of the options. Take a look at this monster of a list for a more comprehensive overview of possible combinations.)

Some of these are more straightforward than others. Especially those which describe a position in three-dimensional space like -auf, -ab, -unter, -hinter, -über, etc. are pretty logical:

durch = through → durchgehen = to pass through

So if you know the meaning of prefixes you can easily understand new verbs that you haven’t seen before, simply by splitting them into their parts, at least in theory.

The problem is that we have many prefixes which don’t seem to have a clear-cut meaning, such as dar-, ge-, zer-, etc. How can you make sense of these? Well, it’s complicated, and instead of making sweeping generalizations which then require a million exceptions, it’s helpful to look at these prefixes in more detail.

Today I’d like to talk a bit about the prefix be-, since I received the following question on the newsletter:

First of all, let’s look at some verbs and how they change when adding “be-“:

begehen – to walk on

At first glance, it seems simple, right? The prefix “be-” simply seems to mean “on”. And yes, sometimes it does appear like that, but this will only get you so far. Let’s look at some more examples:

As you can see the idea that “be-” means “on” already falls flat here. In fact, can you spot any shared meaning here at all? No? Well, you’re not alone. That’s because the prefix “be-” has no explicit meaning.

But then what’s happening here? Why do these verbs use this prefix all? Is it completely random? Natürlich nicht.

According to Duden, the German grammar and spelling bible, the prefix “be-” has two very specific functions:

2. expresses within formations with nouns (or 2nd participles) that a person or thing is being endowed, equipped or provided with something

Too much jargon? Don’t worry, we’ll unpack these step by step.

Before we continue, here’s a quick reminder about the difference between transitive and intransitive verbs:

Transitive verbs are verbs which must or can have an object:

Intransitive verbs never have an object:

So, according to our grammar bible adding the prefix “be-” should transform intransitive verbs to transitive ones. Let’s try it out:

b) From Prepositional Object to Accusative Object

The second use case of “be-” is where we have a transitive verb with a prepositional object that gets transformed into an accusative object.

Sie springen ins Wasser. – They are jumping into the pool.

So, “be-” is supposed to transform these prepositional objects into “regular” old accusative objects. Time for an example:

As you can see the meaning of the sentence doesn’t change here, but the structure does. We can say the same thing either with a prepositional object or — by adding “be-” — with an accusative object.

It’s precisely this function of the prefix “be-” which gave us the (false) notion above that it means “on”. Let’s look at sprühen/besprühen again:

Something similar happens with one of the verbs Myron asked about, with a small twist:

While at first glance it looks like the prepositional object (“für die Blumen”) hasn’t changed, we still see the introduction of an accusative object. How? By adding “be-” to danken, the verb becomes reflexive! And the reflexive pronoun (“mich”) now occupies the position of the accusative object. Confusing? Just keep in mind that (sich) bedanken is reflexive, while danken is not, and you should be fine.

The second function mentioned by Duden is when “be-” takes a noun, and turns it into a verb which expresses that someone or something is being endowed, equipped or provided with said thing:

Ich beblume den Balkon. – I equip the balcony with flowers.

I hope this hasn’t been too confusing so far. Let’s do a quick recap:

So far so good. But we still haven’t talked about the other verb pair that Myron asked about: folgen/befolgen. Unfortunately it doesn’t seem to follow any of the functions discussed above:

folgen is not an intransitive verb (1a)

folgen does not come with a prepositional object (1b)

So what’s going on here? Let’s take a closer look at how this verb + prefix works:

As you can see above, both sentences have the exact same translation, but the difference is in the object case. Folgen requires a dative object, whereas befolgen uses an accusative object. Does that mean that folgen and befolgen always mean exactly the same thing? Well, they can, but they don’t have to.

folgen means to follow (both literally, i.e. physically following and figuratively, i.e. to act according to a plan, protocol, etc.)

But saying: “Ich befolge den Hund” while grammatically correct, is complete nonsense, because a dog is not a plan, set of orders, directive, etc. But you could totally say:

So, when should you use folgen or befolgen?

If you don’t want to make a distinction between physically following an object, animal or person, or more abstractly following a plan, protocol, etc. use folgen. It always works.

If you want to talk explicitly about following a plan, set of directives, rules, protocol, etc. (in contrast to physically following an object, animal or person) use befolgen.