It’s that time of the year again! While Google, Hulu, Youtube and others are playing virtual pranks on their users, let’s pause for a moment and look back into the marvelous history of April Fools’ pranks. Here is my unordered list of nominees for the top five April Fools’ hoaxes. Ever. (feel free to add your own below):

On April 1st, 1962, technical expert Kjell Stensson appeared on Swedish television and explained to viewers that they could instantly turn their black & white TVs into color TVs. How? He started lecturing about the phenomena of light & shadow and something called “double slit interference”.

Then he showed the audience how it worked. All you had to do is put a regular household nylon stocking over the screen, he said. Additionally, you had to be a few metres away from the TV and “move your head very carefully” back and forth. Admittedly it must have been hard to tell if the screen really had changed after Stensson had put the stocking over it. After all the audience was watching him through their black & white screens. Nevertheless, thousands of people fell for it, rushing to their drawers, pulling out their stockings and trying to reproduce the experiment. (more info)

The first real color-TV program in Sweden, by the way, was only available in 1970

In 1998 issue Associated Press reported that the state of Alabama had changed the value of Pi from 3.14159… to 3. The article claimed that they had allegedly rounded it down because the number 3 was more ‘Biblical’. The article contained various statements by both scientists and advocates of the reformation of this number. One of the later reportedly said that “any number that cannot be calculated exactly […] could harm students’ self-esteem.”

The story was posted on the Internet (yes, the Internet was alive and kicking, even 13 years ago), spread like a wildfire and caused great controversy.  (more info)

On April Fools Day in 1957, the BBC new show “Panorama” aired footage of Swiss “Spaghetti Farmers“. It is spring, the crops are astoundingly good that year.  The voice-over compares the Swiss Spaghetti Farming industry to the Italian one and admits that in Switzerland it’s “more of a family affair”. Also he explains that the reason for this great harvest is the disappearance of the “Spaghetti weevil”, the “tiny creature’s depredation has caused much concern in the past”. (watch the original video)

Of course, many people called the BBC and wanted to know how they could get their hands on their own “Spaghetti trees.”

Huff and Puff and Off you Go!

In April 1934 a strange picture appeared in the Berliner Illustrirte Zeitung. It showed a man flying through the air on his skis with two weird-looking jets attached to his chest. Next to it there was an explanation. As the Museum of Hoaxes points out those explanations said that “the man, […] blew into a box on his chest. This activated rotors that created a powerful suction effect, lifting him aloft. Skis on his feet served as landing gear, and a tail fin allowed him to steer. “

Put simply, the man was flying only by the power of his lungs!

After the International News Photo wire, the service had picked up the story, found out it was a fake, it was already too late. Many American newspapers including the New York Times had already re-printed the story & the photo as factual evidence. 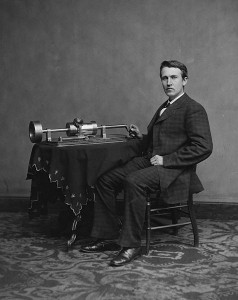 In 1878 the New York Graphic reported that Thomas Alva Edison Edison had invented a special new machine with quite unusual functions. After having become famous for his long-lasting, practical light-bulb and having manifested the miracle of “Let there be Light!”, made the dead speak through the wonders of the phonograph and breathed life into images through his motion picture camera, people were ready to accept anything.

His newest invention, so the Graphic said could magically transform soil into cereal and – even better – water directly into wine!

Newspapers all over America were full of praise for this new invention and the Graphic, seemingly content about the acceptance of their hoax re-printed an especially well-meaning editorial of the Commercial Advertiser under the headline “They Bite!” (source)

More posts about: development, fun, history in Lifestyle
« A Brief Introduction to Language Change
The Art of Singletasking »