Minimalism: Spiritual Materialism in Disguise or: The New Religion of “Living with 100 things”

When I first heard the word Minimalist it was in context of Techno music. Also I’ve seen it as pertaining to interior design. But did you know that Minimalism is also a full-fledged lifestyle movement?

So what do Minimalists do?

There are strong arguments for living a life free from clutter.

So far, so good. This movement is spreading like a wild-fire and although the core ideas are obviously not bad – like every movement it is beginning to show signs of going against its original impetus. In the past few days I’ve read a number of articles looking at those problems and trying to find solutions which – although I agreed with the diagnosis – I found to be only part of the answer. Let me explain… 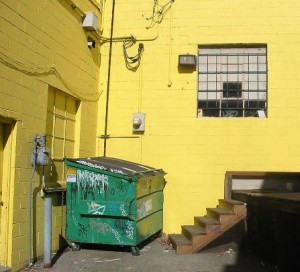 A huge trend among self-proclaimed Minimalists is to count everything they own until they can live with “100 things or less” – numbers vary – but I always wondered: Why do people do this? Not the de-cluttering, selling, dumping, giving away stuff you don’t need – (people do it every spring cleaning) but religiously counting what you have?

There are some that say that you can’t call yourself a minimalist when you still own more than 100 things.

If you ask me, this is very weird.

People say they like to count things to make it tangible, to track their process of decluttering, etc.

But, something very strange is happening here that a lot of followers of this “Simple Lifestyle” seem to miss:

Obsessively thinking about what we own (whether it is in order to increase or decrease the number of things) is fundamentally the same. In other words:

Anti-Materialism is just another form of Materialism.

It’s obvious, isn’t it? By trying so hard to live a life which is not slavishly tied to our possessions, we become even more obsessed with what we own. What before was just an old book that you didn’t even think about is now becoming a huge burden by being the single one thing that keeps you from reaching the “goal” to own as little as possible. But, as John.D Cook wrote correctly in his blog “The Endeavour”:

“[…] an absolute minimum would be to own nothing.”

To me it’s mindblowingly hilarious to observe this. The desire to own nothing (or very little) and the desire to have lots of stuff are actually not fundamentally different! Both are simply two sides of the same coin of a materialistic mindset of “doing and having”.

It was Jesus who supposedly said: “It is easier for a camel to pass through the eye of a needle than for a rich man to enter the kingdom of God”

If you translate “a rich man” into someone who owns a lot of stuff – then the Minimalist has actually higher chances to – forgive the language – “enter the kingdom of God”, no? Weren’t the Puritans “Minimalists”, too for exactly this reason – the hope to get “into heaven”?

Seeking for a New Religion in a Digital World

So, what is so different between the Puritan who owns only a Bible and the 21st century Minimalist that threw out everything except his MacBook?

The first is a so-called “believer” in an analog world, the latter lives in an age where the idea of religion is considered “uncool” – Especially after the crusades of the likes of Richard Dawkins many modern people don’t want to be pigeonholed by accusations of still believing in “the Easter Bunny or Tooth Fairy”

But actually similarities are greater than differences

If you dig a bit deeper you will find that the main aim of the Minimalist movement is also not simply to reduce posessions. (Although many radicals get caught up in this.)

The main idea here is to gain happiness and peace of mind (by simplifying one’s life). Isn’t this one of the strongest motivations why people participate in religious rituals, do yoga and go to meditation retreats?

Don’t get me wrong, I have nothing against this. My point is simply that even the most hard-core Minimalist, Materialist (or Marxist for that matter) who thinks he’s dealing with only “tangible” physical object is doing so for reasons which are beyond the physical.

It’s a small distinction but keeping this in mind might help not getting entangled with the stuff while trying to get rid of it. Many people are afraid of being too “philosophical” and thus choose only to deal with “tangible” things – but that’s part of the problem.

If you realize this you will also see that the real “clutter” is not necessarily in your boxes at home – it’s in your mind. Thoughts, feelings, mental processes. So, to make a long story short…

Minimalism may start by getting rid of clutter inside the house…

But if you do your job right, you will eventually also take your mind to the dumpster.

Entertaining those two ideas you might gain a sense of true long-lasting happiness and – peace of mind. And: no need to sign up for meditation retreats, believe in some kind of “tooth fairy” or go to the Himalayas.

You could start by dumping everything you just read. I won’t take it personally. 😉

Or, if you still haven’t had enough you can read my recent article Life After Work: Is there one? – Coping Strategies for Over-Achievers

Have a nice day!