Looking for Justice – A Parable

They speak about someone who lost his way.

And as the evening approaches he reaches a great cave. He enters the cave and the cave is filled with candles. He turns around, squints his eyes and aks, surprised by the way his voice sounds in the hollow of the cave: “Hello! Is there anybody here?”

The candles are shining from the cold floor of the cave in a sea of light, burning on rocky shelves, sitting in nooks and cracks, hundreds and thousands of candles – a few of them next to where he stands gently swayed by the waves of his voice.

“What are those candles ?”, asks the wanderer. And the old man answers: “Every candle that you see here symbolizes a human being’s life”. 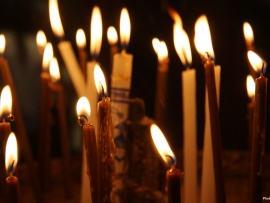 “Yes.”, said the dignified man, “Each flame is burning as brightly as the human life it belongs to.”

So the wanderer asked: “Where is my candle?” And the dignified figure takes him and brings him to another room, deeper into the cave, which is filled with even more candles. He looks around and then, pointing into the sea of dancing flames, says:”Here!” and disappears.

The wanderer sees that his candle has almost run out of oil, actually it is about to extinguish.  In a stab of hysteria he notices a cruse standing  in an alcove in the wall. He picks it up and tilts it towards the candle to pour, to sustain the candle.

And then he hears a voice from somewhere in a neighboring cave, calling and saying: “What are you doing? This is somebody that today he is younger than you in many years! And you call yourself ‘looking for justice’?

“Looking for Justice – A Parable” is part of a project by LearnOutLive’s Hebrew teacher Eti Shani, featuring traditional Jewish legends, mystical and folklorist narrative retold in an accessible way.

in News
« How To Learn Japanese
Japanese Keigo (Respectful Speech) »