11 Yiddish Words in German And Their Ancient Hebrew Origins

Did you know that some of the funniest, most expressive words in German aren’t actually German but Yiddish? They’ve become such an integral part of our language that even native speakers aren’t always aware of their origins.

Interestingly, while American English also embraced many Yiddish expressions, these aren’t always the same ones that made it into standard German. For example, “Klutz” (clumsy fellow) is well known in American English, and although it derives from the German “der Klotz” (block), it’s not part of standard German vocabulary. Vice versa, German words with Yiddish origins such as “Kies” (money), “Großkotz” (braggart) and “Pleite” (bankruptcy), are virtually unknown in standard English.

For simplicity’s sake, I’m focusing mostly on Yiddish words which are shared both by English and German speakers. Ready? Let’s start with something simple. 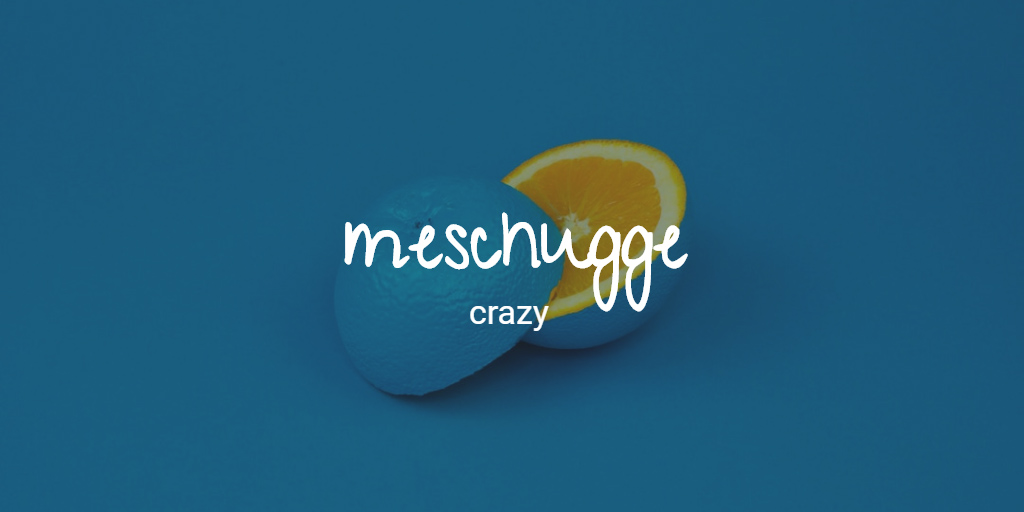 This beautiful Yiddish word, based on the Hebrew for “crazy” – meshugah (מְשׁוּגָּע‎), is known to most English and German speakers. The pronunciation is slightly different though. Listen here: 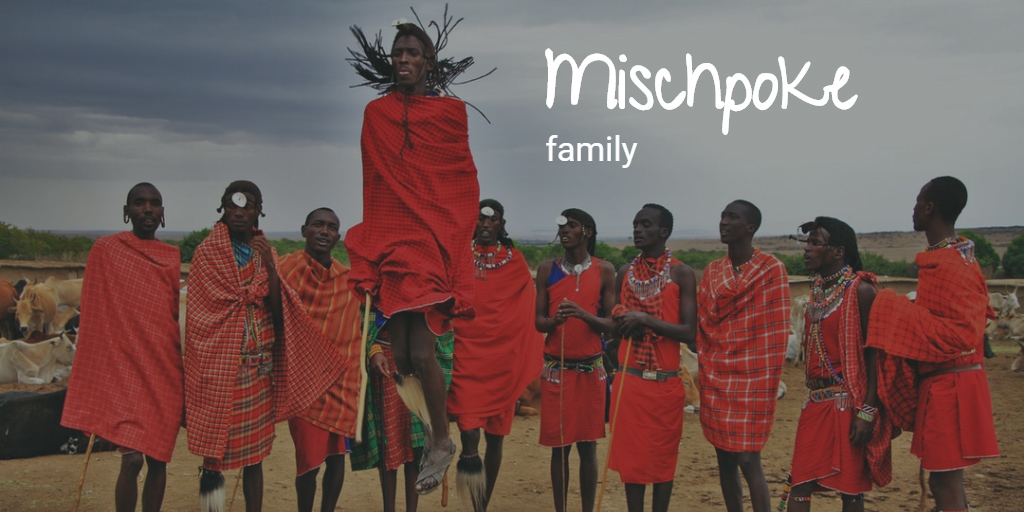 “There is no such thing as fun for the whole family.” ― Jerry Seinfeld.

“Die Mischpoke” is the standard German of the Yiddish “mischpoche”, which is based on the Hebrew word for “family” – mishpachah (מִשְׁפָּחָה‎). 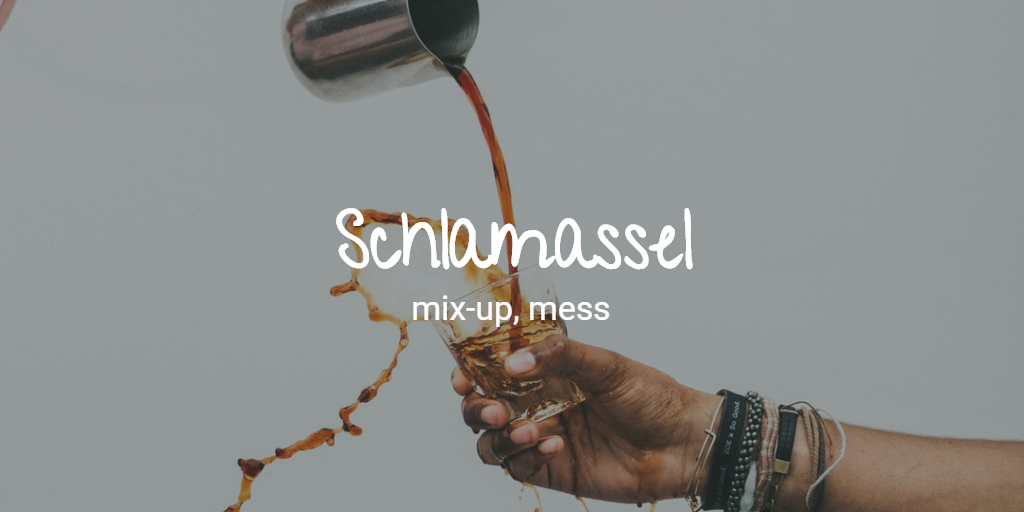 Oy vey! This is another famous one. It’s a compound consisting of the German word “schlimm” (bad, terrible) and the Hebrew for “luck” – mazal (מזל), as made famous by the Yiddish “Mazel tov!” The first part could also be from the Hebrew negation particle “shelo” (שֶׁלֹא). 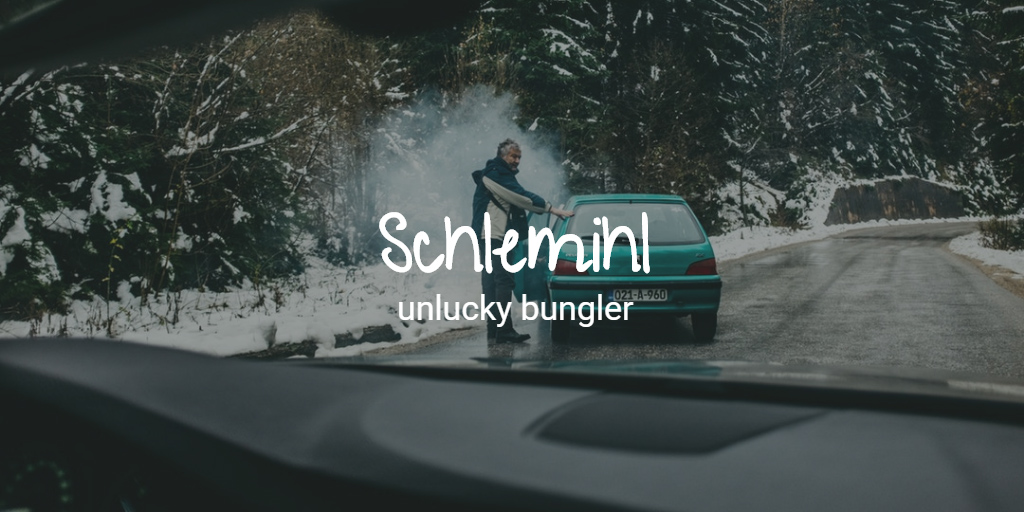 While some people experience Schlamassel only once in a while, it’s the Schlemihl’s modus vivendi. He’s the proverbial unlucky bungler or “Pechvogel” (literally: “bad luck bird”) and one of the archetypes of Jewish humor.

But what’s this word’s origin? It turns out that the first Schlemihl (or “shlemiel” in English) was the biblical figure Shlumiel ben-Zurishaddai, the chief of the tribe of Shimon. It says that his tribe was the poorest tribe of all. To make matters worse, Shlumiel later gets mixed up with the wrong people and gets executed. Talk about a real Schlamassel! 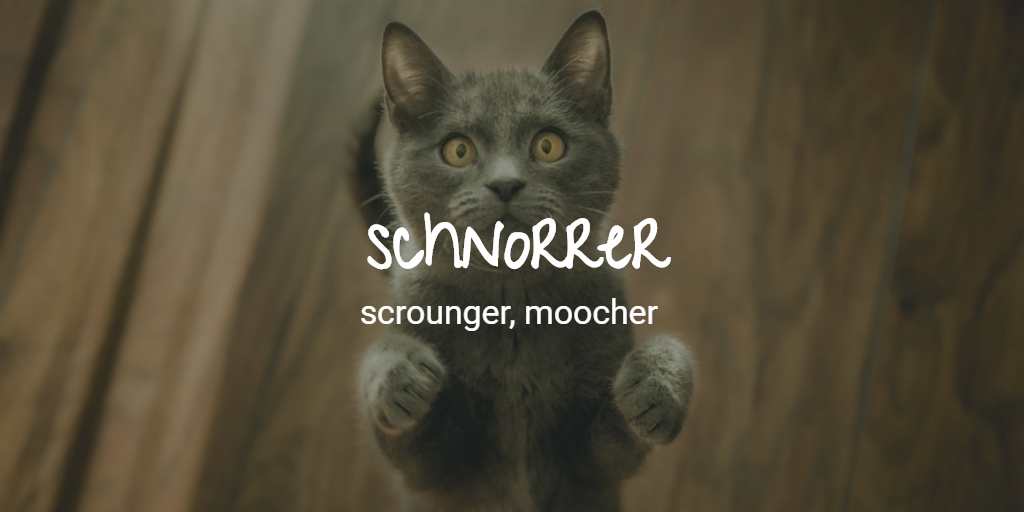 Now this is one that may not be well known in English. A “Schnorrer” in German is basically a scrounger, moocher or freeloader, with “schnorren” being the verb.

The only explanation that I’ve found for this word is that in medieval times (when Yiddish originated) wandering street musicians often used a ratchet which is known as “die Schnarre” in German, and since “a” becomes “o” in Yiddish, we get the “Schnorrer”, i.e. a person who makes noise and begs. 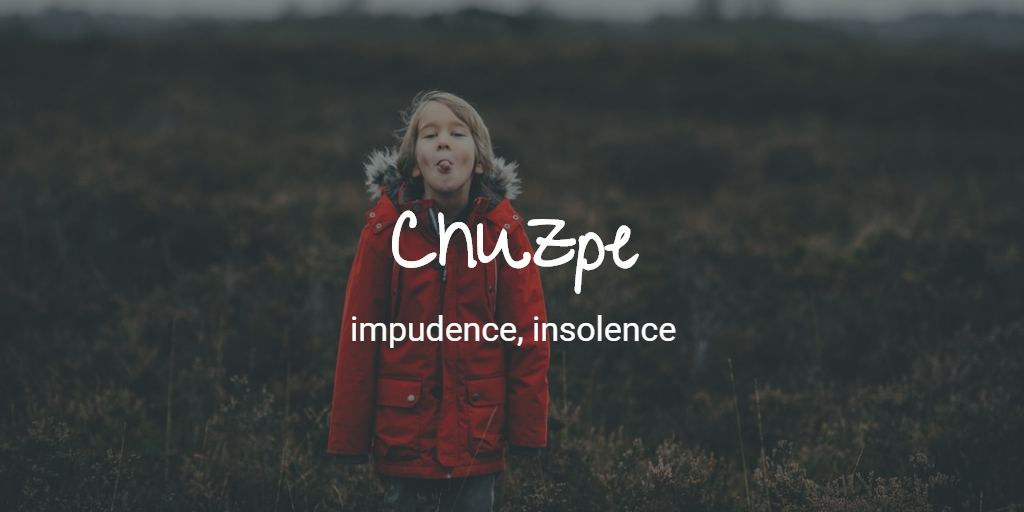 This is probably one of the most famous Yiddish words, describing a specific kind of audacity, for better or for worse. It’s based on the Hebrew word for insolence or impudence – “chutspah” (חֻצְפָּה). While the original Yiddish word has a mostly negative connotation, in German and English it’s often used more broadly to describe a general attitude of courage or ardor.

Regarding the Hebrew root “chutspah” I’ve also heard that it’s a compound of “chuts” (out, outwards) and “peh” (mouth), which paints a picture reminiscent of a “Großmaul” in German or “loudmouth” in English. 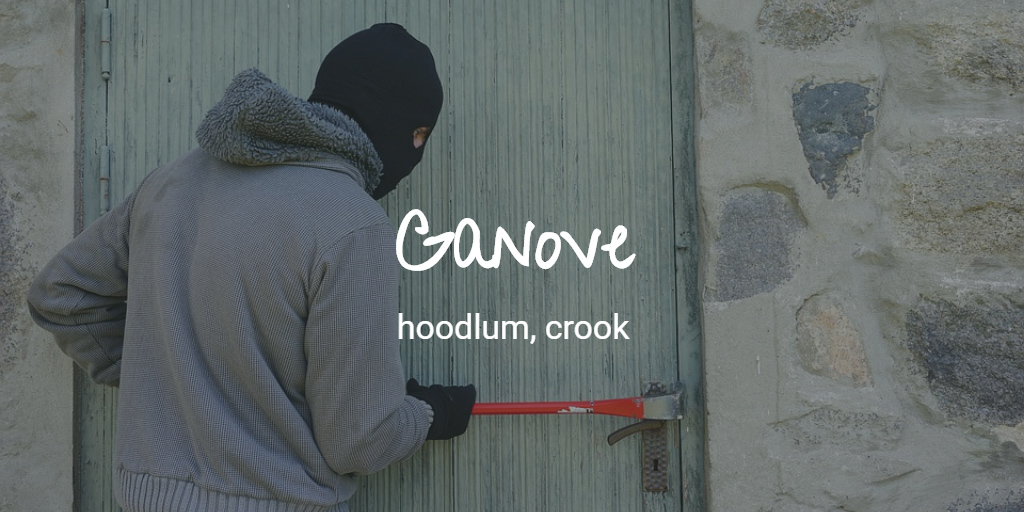 “I’d sooner be called a successful crook than a destitute monarch.” ― Charlie Chaplin

A Ganove in German is a crook, criminal, hoodlum, etc. It’s based on the Hebrew word for thief: “gannav” (גנב). 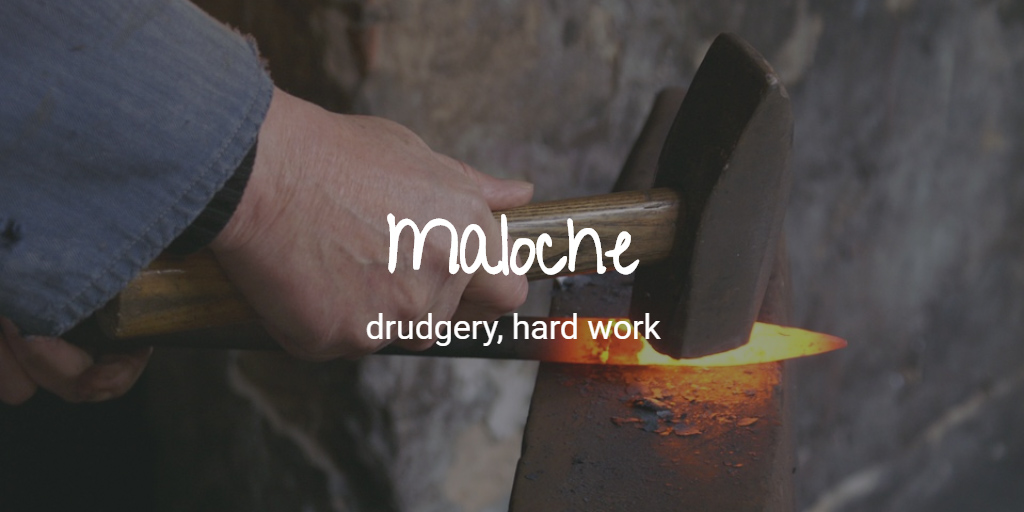 When, as a kid, I first heard this word being used by workers in North-Rhine-Westfalia, it always struck me as odd. Today I know why. It’s actually an ancient Hebrew word for “drudgery” or hard work: “Melacha” (מְלָאכָה) that made it into German via Yiddish. Note, how the “a” at the end is again turning into an “o”.

I’ve never heard this one being used in English so far. 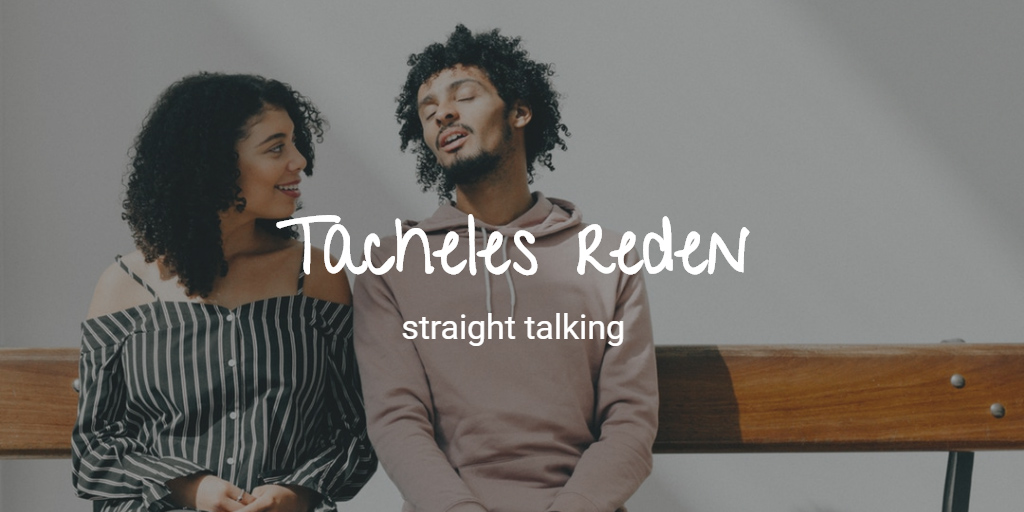 Do you speak “Tacheles”? When Germans ask to “Tacheles reden” they mean plain talking, or as the Americans say: “talking turkey”.

It’s based on the Hebrew word “tachlit” (תַכְלִית‎) which means as much as purpose or aim. As far as I know, it’s not being used in standard English. 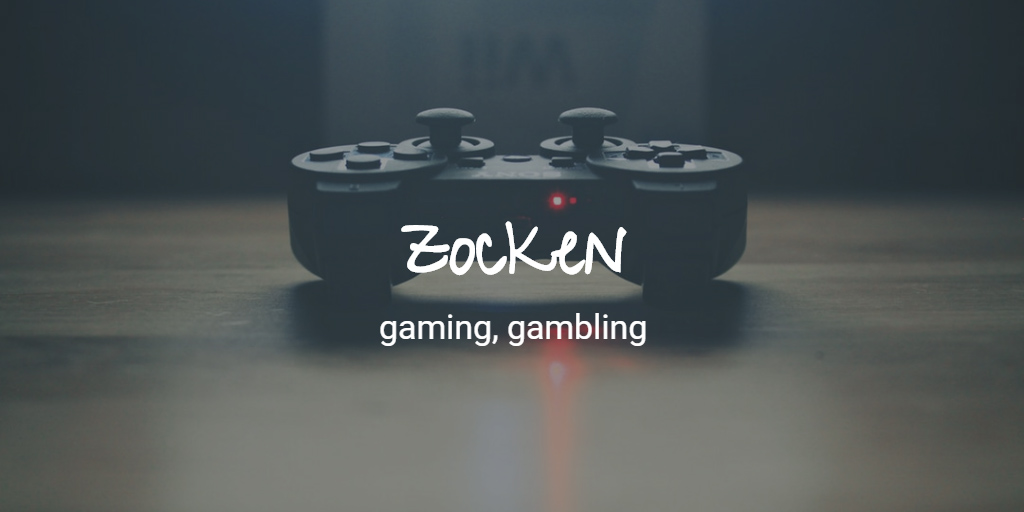 This is a word that’s very widely used in German, and it refers to gambling or recently: (video) gaming.

While it has some negative connotations, “abzocken” – rip off, is even stronger. 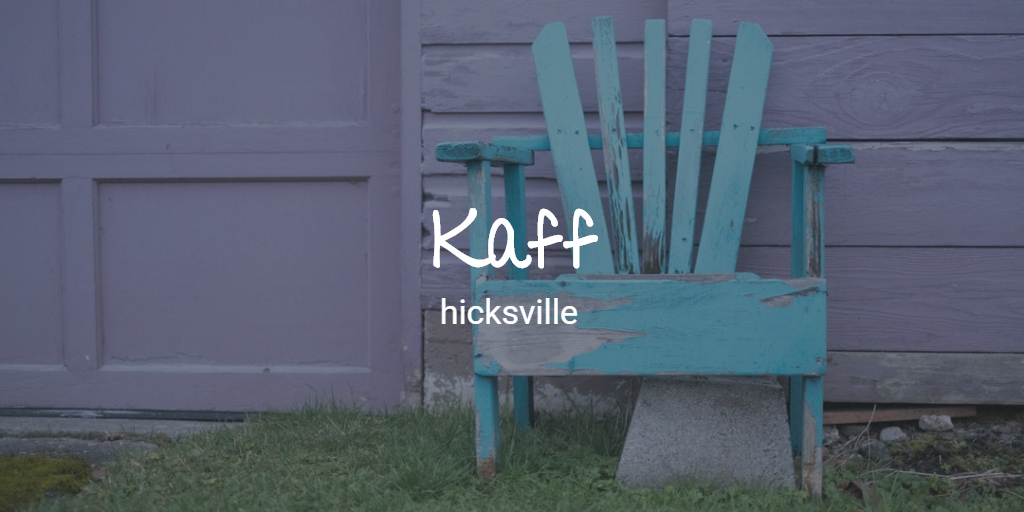 “I had rather be first in a village than second at Rome.” ― Julius Caesar

The German word “Kaff” refers to a small, unimportant village where nothing of note ever happens. In other words: a one-horse town, backwater or hicksville. There is some dispute whether this word actually came via Yiddish from the Hebrew word for “village” – kfar (כָּפָר) or not perhaps from the Romani “gav” (village).

These are just some of the Yiddish words in German. Check out this exhaustive list for more.