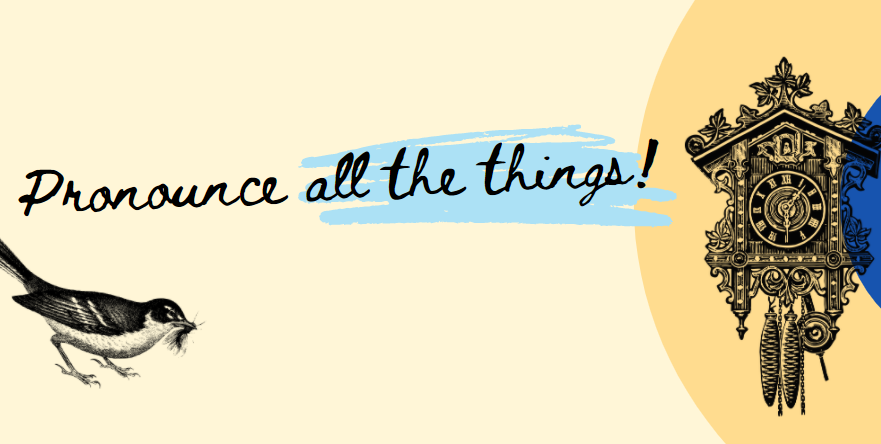 What do you do when you don’t know how to pronounce a German word? It’s a simple question, right? But there are many answers!

Today I’d like to share some resources that will help you find the right pronunciation of any German word out there within just a few seconds, no matter how offbeat or out of the ordinary.

And no, none of this includes being trained in the arcane arts of the International Phonetic Alphabet. If you can make sense of its squiggly set of symbols, good for you, but being able to hear a word with your ears is something else entirely.

Let’s get the six-letter elephant out of the room first. That’s right, I’m talking about Google (Translate) of course. It’s so easy! Just pop in a German word, tap the little speaker icon and get a somewhat accurate result. I say “somewhat” because its results are non-human.

Admittedly, speech synthesis has come a long way since 1984’s Macintosh first crackly “Hello”. You can throw the strangest words into Google Translate (even weird neologisms as shown below) and thanks to its advanced neural network, it nearly always produces passable results. Emphasis may sometimes be off, but in 99% of the cases it gets the phonetics right.

Which is impressive enough. But if you’re like me, you still won’t trust AI blindly, no matter how advanced or newfangled. Especially when it comes to proper names, idioms or local varieties, I’d rather get the pronunciation straight from the horse’s — I mean — human’s mouth.

So, without further ado, here are some of my favorite resources for getting real-world pronunciations from native German speakers:

Maybe it sounds like an obvious choice, but Wikipedia’s German dictionary has more than 125.588 entries, and most of them come with recorded pronunciations by native speakers.

For the linguistics nerds among you, Wiktionary always lists the IPA as well, which can come in handy, especially when dealing with varieties. For example, have you ever wondered how to pronounce words like “König” correctly? Is there a hard “c” at the end like in “Mac” or is it a soft “ch” sound like in “ich”? Both are of course correct, and Wiktionary neatly lists the varieties in IPA and with recordings.

Another cool thing about Wiktionary is that it also has tons of idioms, sayings and adages, most of them with recordings, so that you can easily find out where the emphasis goes in sentences like “eine Hand wäscht die andere” or “wo gehobelt wird, fallen Späne“**.

If Wiktionary doesn’t have the word you’re looking for, take a look at Forvo next, a site that aims to get human recordings of all the words in the world. It’s an admittedly ambitious project where native speakers are invited to record themselves. I’ve been using Forvo for a number of languages for many years now and it has been an invaluable resource, especially when I wasn’t able to find the pronunciation anywhere else.

For many words you’ll find a number of different recordings from speakers across different regions, which can help to get a sense of varieties.

As some of you know dict.cc is one of my favorite German online dictionaries, especially for idioms, most of which also come with excellent human recordings. Just listen to the German phrase for “You must be psychic” for example (click on the little speaker icon to the right of the phrase).

Last but not least, this is a cool site I’ve only discovered recently. Youglish lets you search through millions of Youtube videos and find the word you’re looking for on the second mark, with highlighted subtitles.

Not only can this be helpful to get some more real world context for a word, you can also use Youglish as a creative way of finding interesting video content based on topics you’re interested in.

Let take a German word infamous for its difficult pronunciation such as “Eichhörnchen” for example, and Youglish will return results from 153 different videos which you can browse through easily.

What are your favorite resources for getting German pronunciations? Any special tips or sites you like to use? Let me know in the comments!