The German learning adventure continues! Join Dino & Elisabeth on a strange quest across the valley basin of Stuttgart and learn about local culture & cuisine along the way.

Almost everyone knows Germany’s capital and major cities. But did you know that we have tons of little towns and villages with the most absurdly hilarious names such as Hundeluft (“dog air”), Darmstadt (“intestine city”) and Schweinfurt (“swine ford”). In this post you’ll find a selection of funny German town names and their historic and linguistic origins, which often feature a surprising mix of languages.

Katzenelnbogen is a town in Rheinland-Pfalz whose name immediately conjures up images of cute kittens, but before you get too excited, it actually has nothing to do with our feline friends. First of all, the word “cat’s elbow” in German would actually be spelled a bit differently, namely “Katzenellbogen”. In fact, the true origin of the name remains unclear. Some theories state that it is a Germanized form of the latin Cattimelibocus, which may refer to the people of Catti, the forefathers of the Hessians. But there are also those that claim that the name actually stands for a “small angled bend of a river or brook”.

Oberbillig is an old fishermen’s village at the Mosel river. So is it a great place to get discounts? Perhaps, but it seems that the name actually has Celtic roots, since it was first registered as “Billich” in 965 A.D. 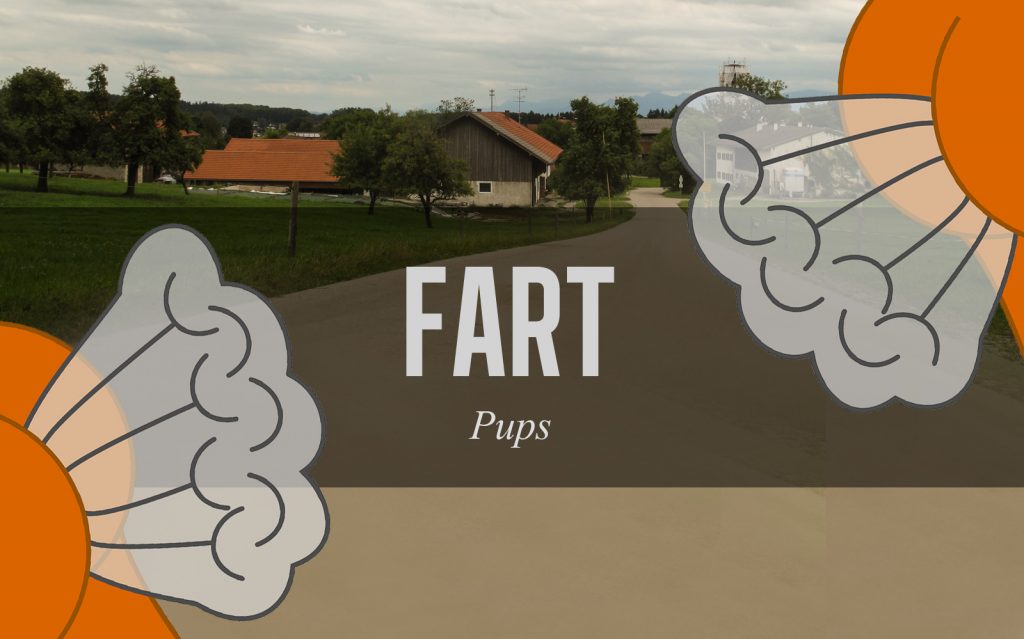 While inhabitants of the Bavarian Pups (pronounced: “poops”) have to endure constant questions about the local wind situation and how their bean harvest is going, the name actually dates back to a Roman settler called “Pupis” or “Puppis”. By the way, just like a Frankfurter is a person from Frankfurt, an inhabitant of Pups would literally be a Pupser, i.e. someone engaging in flatulence. 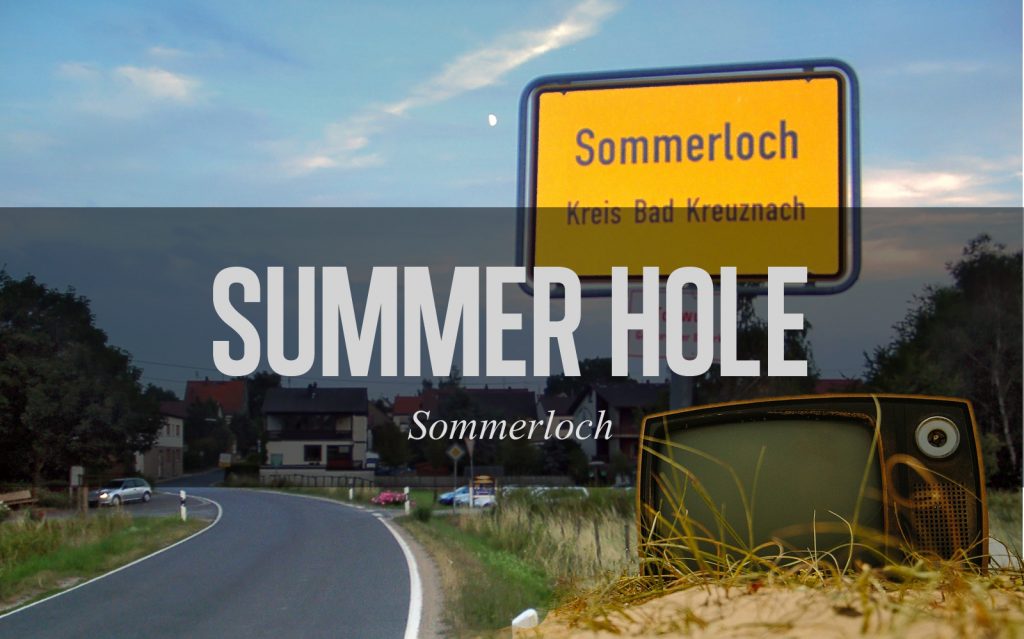 Sommerloch, literally: “summer hole”, is a small town in Rheinland-Pfalz but it’s also the German term for what is known as the “silly season” in the UK, “dog days of summer” in the US, or “cucumber time” in many other languages, in short: the slow news season. Granted, Sommerloch is a small town and therefore not exactly at the center of exciting events, but apparently it did not receive this name for its lack of newsworthiness but because it simply refers to a “moist hollow”. (It used to be spelled “Sumerlachen”, with “Sumer” being an old term meaning “southwards” and “lache” referring to the hollow geographical region.) 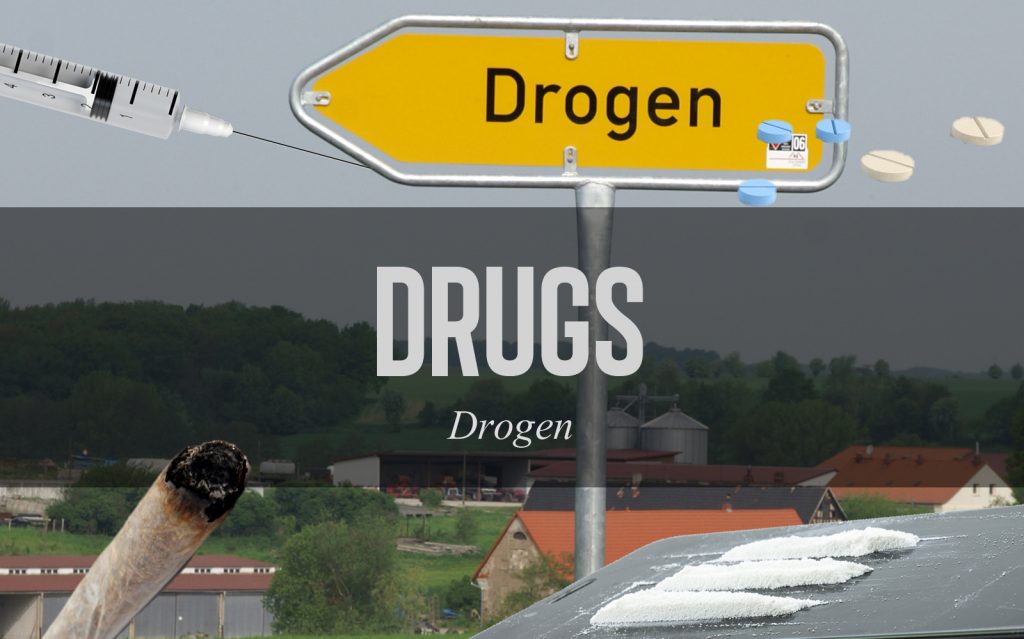 Just like the world-famous Austrian town with the name “Fucking” (pronounced “fooking”) the Thuringian town of Drogen has a big problem with people constantly stealing their yellow town signs. To counter this, they’ve tried putting up alternative signs which are two meters high and therefore presumably out of reach of sign snatchers, but even this could not prevent the constant pilfery. Of course, in reality the name has absolutely nothing to do with getting high but is simply based on the Slavic “drog”, meaning something like “beautiful” or “lovely”. 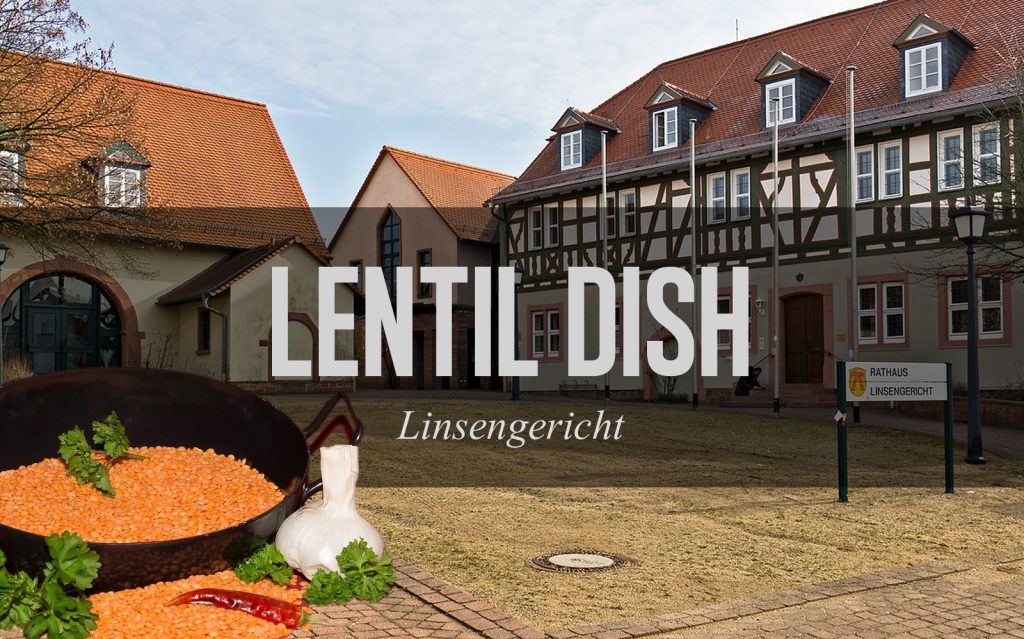 The Hessian city of Linsengericht literally means lentil dish and is perhaps one of the few city names in this list where the name is not a complete product of misunderstanding or Germanization, but the region was simply well-known for its bean fields. However, the term “Gericht” here doesn’t refer to a dish but to a place of execution (“Richtstätte”). Guten Appetit! 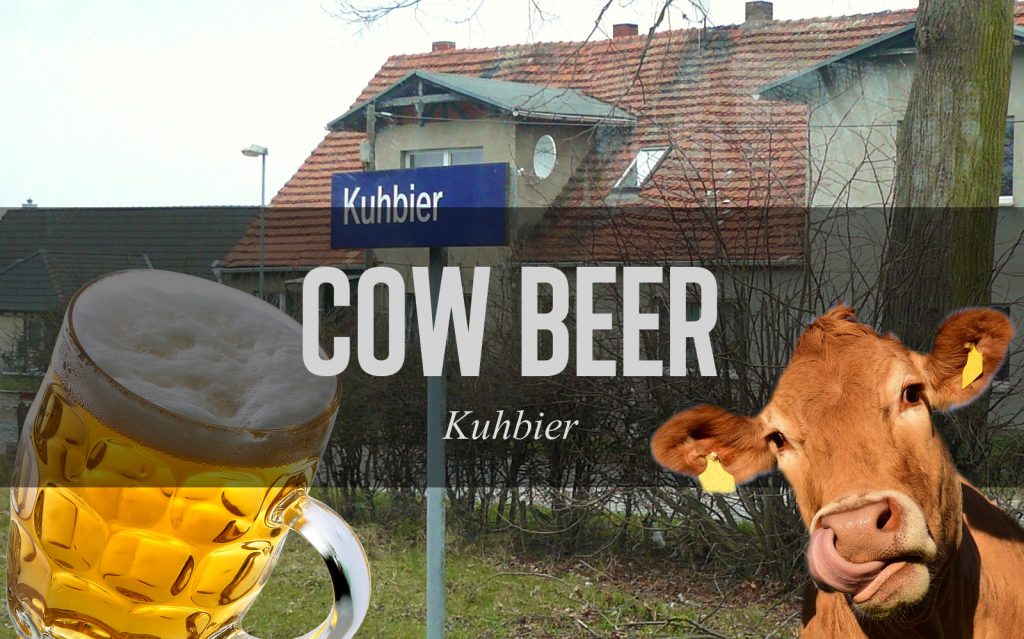 What’s this? A dairy-based brew? A place where cows indulge in malty pleasures? Unfortunately the town of Kuhbier in Brandenburg does not feature a single bovine-themed brewery, neither does its coat of arms show a mug and a cow. It’s simply a Germanized form of the French or Huguenot family name “Coubier”.

The town of Altenheim in Baden-Württemberg may have an aging population, but it surely can’t be that bad! The origin of the name is unclear. Please add a comment if you know something! 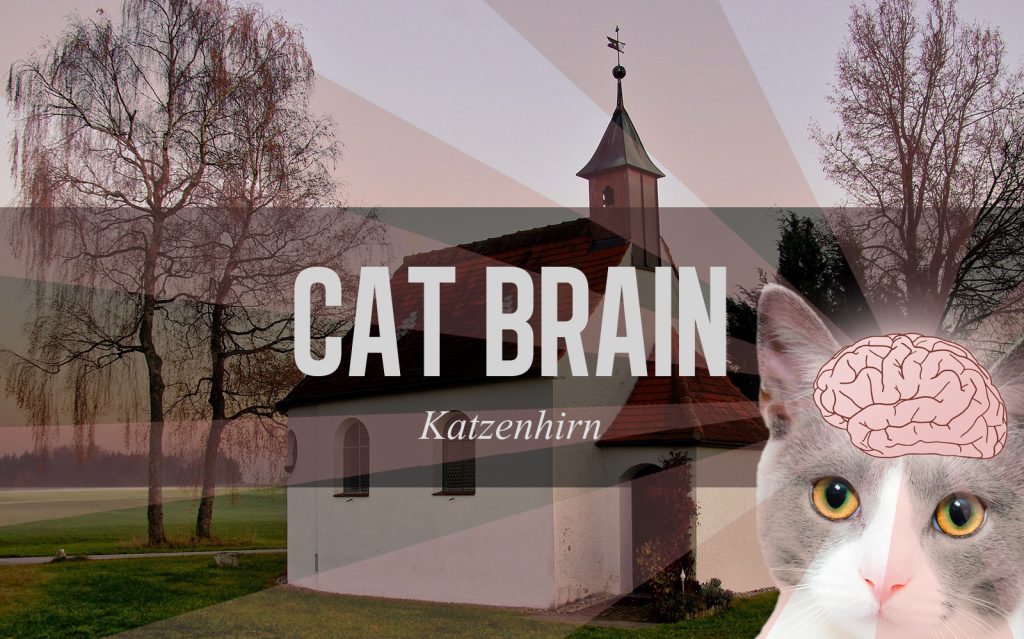 Insult or compliment? The name for the Swabian town Katzenhirn literally translates to “cat brain” but it’s neither an allusion to the size of cerebral matter of its inhabitants, nor does it refer to some morbid local dish. The term “(Ge)hirn” (brain) here just refers to the skull because for whatever mysterious reason this town was laid out in the shape of a cat’s skull! Go figure. 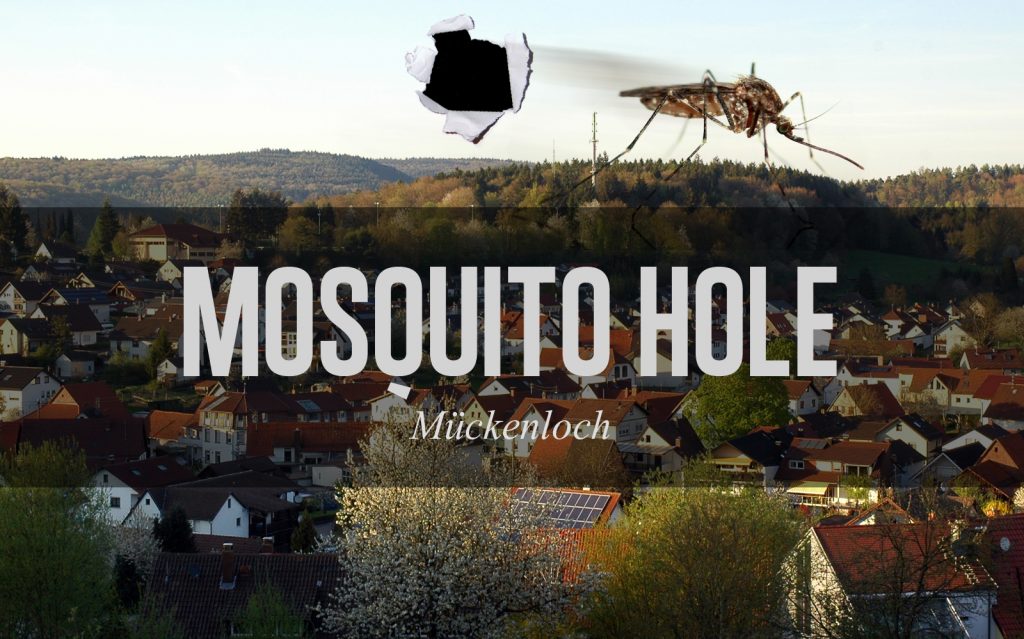 Mückenloch is a town in Baden-Württemberg with a population of about 1100 inhabitants. First recorded as “Muegenloch” in 1273, the original meaning of the name is unclear but curiously, since this village is situated in an area with many brooks, it’s actually a perfect breeding ground for mosquitoes! 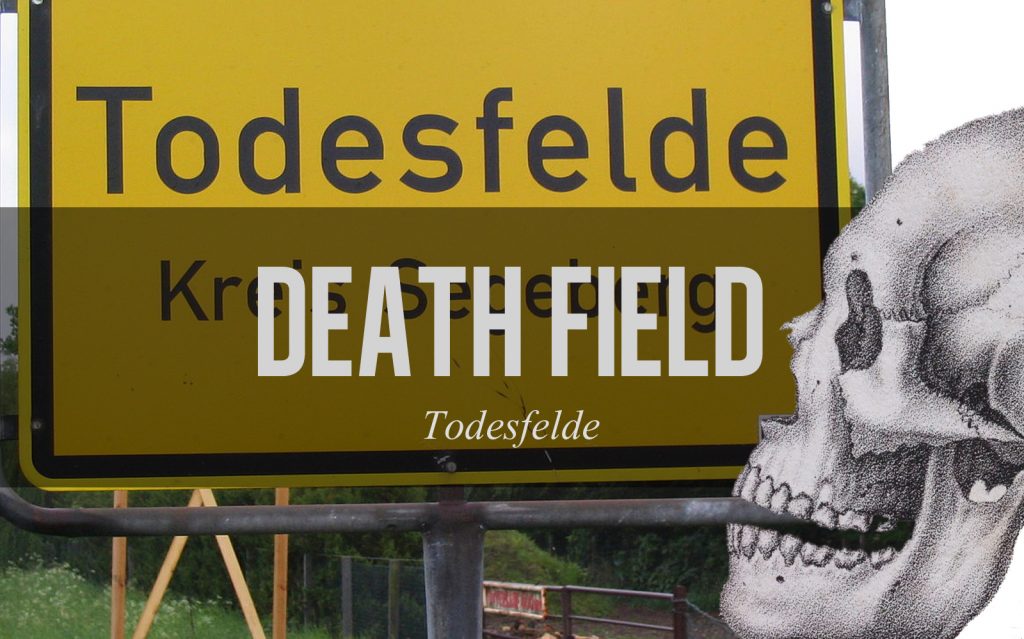 Todesfelde is a small town in Schleswig-Holstein, Northern Germany, which sounds like an address for a graveyard or a gated community from the zombie apocalypse. But apparently, it was originally called “Odesfelde”, without the “T”, which simply means “Ode’s Field”. It’s not clear who “Ode” is or why they added a “T”. Curiously, though, in 2012 and 2013 archaeologists discovered the remains of a Bronze Age settlement in area, including a huge burial ground! Nomen est omen. 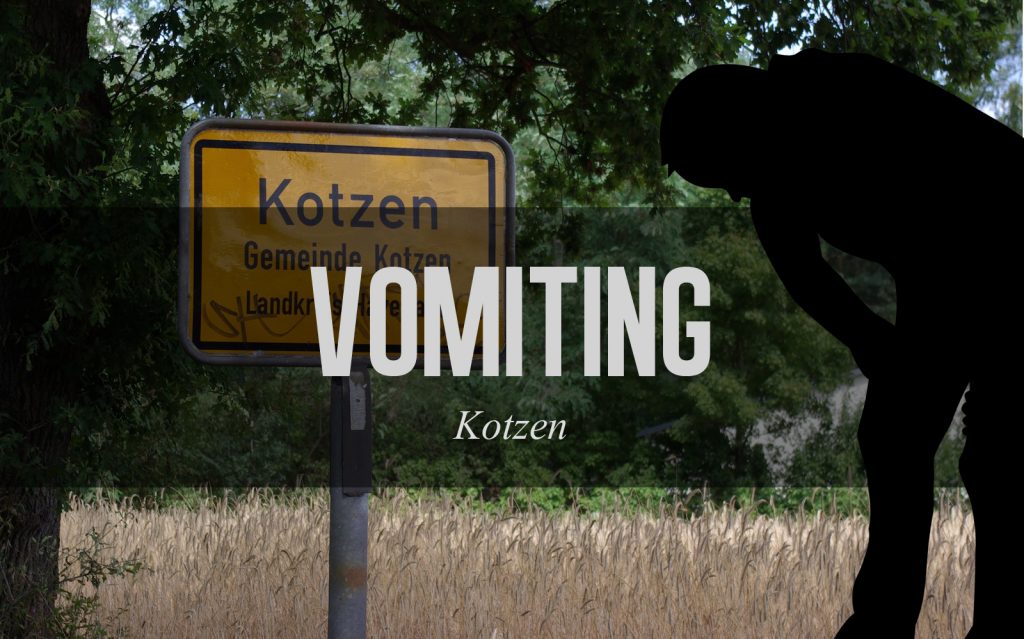 Kotzen is a Brandenburg town which sounds like the binge-drinking capital of Germany but actually has nothing to do with the verb “kotzen”, to vomit. In fact, it was originally registered as “Cozym” which is based on a Slavic root that means something like “wisps of hair” or “goats”. Prost Mahlzeit!

4 / 5 ( 7 votes )
in German,Language Learning,Learn German With Text
« How To Quickly Build And Remember Vocabulary
The 3 Most Effective Ways To Keep Your Learners Engaged »

Get Your Free Café in Berlin Workbook