The Japanese language has the interesting and curious trait of actually varying the forms of verbs used in otherwise normal, standard sentences to convey greater politeness and respect. This is often done in business, particularly in hospitality; however, “polite” speech is also the standard form in classrooms, on news broadcasts, and so forth.

Japanese Keigo (敬語、respect + speech) is divided by many into three broad classes, using “iu” (To Speak) as an example: 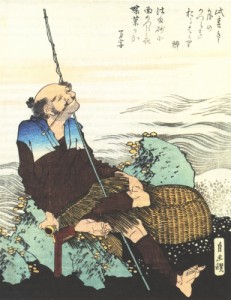 So far, all we have seen is what could be gleaned from a glance at Wikipedia. Nonetheless, this is not exactly correct in one sense: you can take honorific and humble verb forms and give them a -masu ending anyway.

Let’s briefly see this in action. (Note that the first part will not appear properly unless you have Japanese characters enabled in your browser. Regardless, I will use romaji for pronunciation purposes so that everyone can follow.)

あの方はJohnと仰います。 (Ano kata wa John to osshaimasu.) “He is addressed as John.”

…As you can see, it’s difficult to find ways to translate the finely detailed differences between the above. However, this is what is going on:

#3: “osshaimasu” is the over-the-top honorific form of To Say.

#5: “moushimasu” is the over-the-top humble form of To Say.

This brings us to our second major issue: what in the world is the difference between “honorific” and “humble”…?

It’s simple, once someone stops and explains it to you. I shall now do so.

Honorific speech raises, in word at least, the social status of the person being addressed (spoken to).

Honorific speech is also used by subordinates to speak to their superiors in a way that greases the wheels of social relations.

The key thing to remember about honorific speech is that, properly used, it is only used when addressing other people.

Humble speech is used to lower, in word, the social status of the speaker. Also, a speaker who is part of an identifiable group may speak humbly on behalf of another member of that group. In this way, a salesperson could speak using humble speech on behalf of a fellow salesperson for the same store.

More Than A Golden Rule

When dealing with customers, a salesperson will address others in an honorific way to raise their importance, and address himself in a humble way to lower his/ her own importance.

This is par for the course in business. The point of going through all this trouble is to relax the customer, not to make the customer feel stressed and nervous about reciprocating.

So how does a person learn Japanese keigo?

Honestly, it’s not something I’d want to teach people who aren’t fully ready for it. A person has to have fully mastered the “normal” verb forms before wading into these treacherous waters. Even for Japanese people, it takes something akin to apprenticeship to learn the ropes of using it under live fire conditions (that is, in actual commerce).

Nonetheless, once mastered, keigo is not only a sign of respect: it is a floral and beautiful part of the Japanese language. If spoken in a manner that comes off as honest and well meaning, it will make others feel as though they are being treated with a special, very personal touch. If that’s how they feel, then that is indeed how they are being treated, is it not?

I now respectfully bid you adieu.

in News
« Looking for Justice – A Parable
Facts and Futenma »