Famous Quotes and Where They Come From 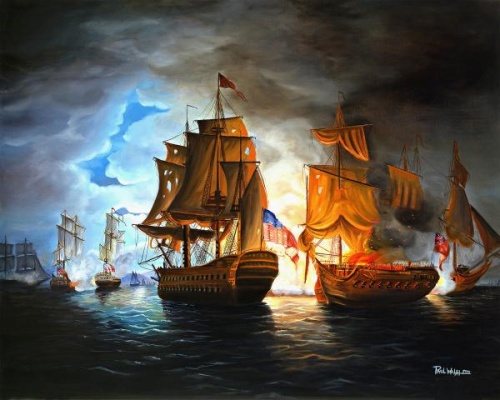 I want this to be the first article of several detailing the role that history plays in modern culture through the handing down of famous quotations.

In this case, we will begin with “I have not yet begun to fight!”

The Battle of Flamborough Head

In September 1779, the American”Continental Navy” ‘s Captain John Paul Jones commanded a squadron of four ships, the remainder of which were captained by French captains; all of the ships, save one, were on loan from France to assist the Americans in doing damage to their shared British enemy. (The expense of such support would later be one factor leading up to the French Revolution.) Jones’ squadron had sailed around Ireland and was causing what havoc it could down the eastern coast of Britain.

This squadron received word of potentially large prizes (naval term referring to a civilian trade ship under an enemy flag); this turned out to be no less than a 50-ship trade convoy returning from the Baltic Sea.  Some ships did not heed warnings by flags and guns from the convoy’s chief protector, the H.M.S. Serapis (that stands for Her Majesty’s Ship, FYI), but soon discovered the threat for themselves and tried to make a run for it. The Serapis tried to block the Americans while a second, smaller, less well armed ship tried to shepherd the convoy away. This occurred not too far from Yorkshire, but the nearest landmark was Flamborough Head.

This devolved into an exchange of broadsides between Jones’ Bonhomme Richard and the Serapis. The former was a converted merchant ship with a few old, heavy British guns that soon exploded when fired; the latter was a fairly new warship with all its guns, including heavy ones, in good order. Unsurprisingly, the American-captained ship took the worst of it. Jones attempted to have his damaged ship get close enough for “close combat,” but the competent maneuvering by the Serapis‘ captain kept that ship just out of reach, still firing guns. Finally the Bonhomme Richard rammed its bow into the Serapis’ stern – a situation neither could exploit against the other.

It was at this point that the British captain, Captain Pearson, sent a signal to Jones, asking,

Has your ship struck? – Captain Pearson

To strike colors is to lower one’s flag. This is universally seen as a sign of surrender (and would be seen as such before anyone ever gets the chance to raise a white flag). Therefore, Pearson was asking if Jones was surrendering.

As you might imagine, this was received as a taunt. After all, if Jones had “struck” his colors, it would have been visible to all. Thus, Jones replied in what became a famous quote:

Sir, I have not yet begun to fight! – Captain John Paul Jones

This proved to be no empty boast after all.

By a stroke of luck, the “jib-boom” of the Serapis (a jib is a forward triangular sail; a boom is a wooden pole at the bottom of a sail) got stuck in the rigging (sails etc.) of the Bonhomme Richard. Jones ordered his men to quickly tie the two ships together at this point of contact. Despite Pearson’s attempting a counter, dropping anchor to slow his ship and make the American ship move past, Jones’ men were too quick (one must imagine they were highly motivated to succeed!), and the Bonhomme Richard began to turn rather than sail past. This ended with both ships’ sides pinned against each other, locked in a deadly embrace.

Still attempting to handle his own side of things, the French captain of the American-built Alliance sailed close to the locked ships. Seeing the situation clearly, Captain Landais had his guns fire at the top deck of the Serapis to clear it of men and guns to the extent possible while moving past. This broadside was aimed at the bow of the Serapis… and the stern of the Bonhomme Richard, doing damage to combatants on both ships. With friends like these…

Anyway, the Americans were still losing, but one grenadier (a handler/ thrower of grenades, which were used in cruder forms centuries before the modern fragmentation grenade) apparently managed to throw a grenade to where it could detonate a charge of gunpowder on the Serapis. Exactly how this happened is disputed, and with good reason; any way you slice it, it was an incredibly lucky break for the Americans, for a chain reaction explosion did considerable damage to the guns and crew of the Serapis.

Throughout all this, the remaining two  small ships of the four-ship American squadron were closing in, plus a captured schooner that had a boarding party (which Jones could have really used here). Over the three hours since Jones’ rejection of the surrender taunt, nearly every ship in the convoy had escaped unharmed. With a boarding party approaching and the Serapis unable to escape, and being unable to sink the Bonhomme Richard because its guns could not tilt down far enough at point blank range (its shots were literally passing through the holes in the Americans’ hull and out the other side), Captain Pearson deemed they had done all they could do, and extending the battle would do nothing but exacerbate the casualties.

Against great odds, the Americans had defeated the 44-gun Serapis and accepted its surrender, capturing it for the Continental Navy. The Bonhomme Richard itself was a lost cause and was reluctantly abandoned the next day.

In spite of the entire battle having been of little strategic help to the American cause – the convoy did escape almost entirely, after all – Americans were overjoyed at what they viewed as a heroic battle against the odds that resulted in victory. This victory – and the famous quote that came to represent an optimistic ideal – gave Americans a priceless propaganda coup and a rallying cry.

The ideal represented by “I have not yet begun to fight!” is really quite simple. It is that Americans should never give up at the first setback; they shouldn’t give up even when an objective observer would predict likely defeat. The mere act of continuing the battle means embracing the chance that you will get some kind of opportunity, some kind of lucky break that can turn the tide of the battle in an instant.

Consequently, in American culture, this quote is synonymous with determination and fighting spirit.

These American values are honored not only in relation to the military, but every time a high school, college, or professional sports team runs onto the field of play.

in Learning English
« American Culture: The American Civil War
The Internet is not a Mass Medium. Or is it? »