What would you do if nobody’s watching? 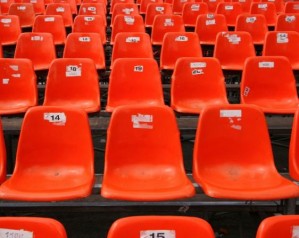 I’m a big fan of minimalist writing. Minimalist prose that is from the likes of Amy Hempel, Douglas Coupland and Chuck Palahniuk. The latter who is mostly known for writing the book that the movie “Fight Club” was based upon actually has written a number of worthwhile novels that are often criticized as “shock-literature” but beyond the imminent impact of his sometimes gut-twisting invocations a sense of the big picture sometimes shines through.

There was a line in his novel “Survivor” which I’ll never forget:

“You realize that there’s no point in doing anything if nobody’s watching.”

Let’s just take that out of context for a while and look at the general idea.

How many things do we only (or partly) do because others are watching? Time for a thought experiment:

you are sitting in an empty room. There are no cameras, cellphones or other means to tell people what you are doing.

In short: You are invisible to the eyes of any other human being on the face of this earth.

Now, what would you do?

2. Keep yourself in good shape. Read good books. Write down everything you ever wanted to, without censoring yourself or taking into consideration what others might think of you. Dance like there’s no tomorrow!

There’s no right or wrong answer to this. But if we remove the veil of social isolation from those two scenarios, you will find that

1. Many people are participating in social or political fashions and feigning interest in this and that celebrity simply because everybody does. The moment you take the peer pressure away, you will see a lot of that falling off. A person will return into a sort of primordial slumber as describe above. If you don’t believe me look at how people behave in common tourist places during vacations. And: It doesn’t matter whether you are for or against what people think. As long as you’re reacting to those things you’re doing it for the attention. Take away what others might think or feel about you and suddenly you stop to care about things that just a minute before seemed worth dying for. Yes, that includes most political opinions and prejudices.

2. A person who has a passion for dancing, reading, writing, playing music, learning languages cannot expect his or her surrounding to understand or support those endeavours. In fact, if someone has an obscure passion for collectible stickers from outdated Korean magazines, if he is on a mission of finding the perfect cow-bell sound or is simply obsessed with learning an extinct language like Greenlandic Norse or Susquehannock she will probably be ridiculed if she’s too explicit about her passion.

So, in case it hasn’t yet become completely clear:

Pleasing the Populus is the opposite of following your Drive, Passion, etc.

“Pleasing the populus” as I understand here, doesn’t have anything to do with making others happy or a genuine motivation to benefit others. It simply means staying within the frame of expectation of what others think and feel about you.

It pleases people if you are like everybody else. It puts them at ease. It keeps the status quo. Not challenging it reinforces it.

To understand this better it is helpful to look at our contemporary culture of worshipping celebrities. First we lift them into the lime-light with a hundred hallelujahs and then we laugh at them when they’re down in the gutter. We don’t really care what those people do or who they really are. But we desperately need them to maintain the status quo. Short-lived celebrities are the perfect evidence that the average opinion of the public is powerful and should be obeyed. Or else…

And, just to get another confusion out of the way. We think that the public acceptance of people like Beethoven, Shakespeare or Nietzsche is proof of their excellence. So quite logically we think that everybody who’s in the limelight is a great person. But it doesn’t translate like that. In fact, I believe it is the opposite. The most popular and most famous people are often not those who are the most excellent in their skills, manners or general attitude! There are of course always exceptions but we should not think that just because somebody is “in the papers” or “on television” he or she more to say than any simple man on the street. The Internet Age has made that obvious to many, already.

So, what would you do?

It’s not the aim of this article to say that all social and cultural conventions are bad and have to be abolished. If you get this idea, you have misunderstood me. This has nothing to do with anarchy or counter-culturalism.

The point here is that if you want to reach excellence, nobody cares.

Quite far from being a pessimistic outlook this is actually the most vibrantly positive thing you could ever imagine. Why?

While everyone is busy trying to fit into each other’s expectation and not stepping on any toes you are free to perfect your craft, skill or talent and become a master in whatever field you set your mind to!

It might sound silly but the status quo, although this term is often used negatively, has quite a positive backside. It creates a vacuum of freedom in which you can do whatever you like. It’s like a giant umbrella which makes you invisible.

So, do whatever you need to do. Go to the supermarket, go to the bank. Go to work. Get on and off buses. Then practice the guitar like there is no tomorrow. Sing, dance, compose poetry in Aramaic. Because, in fact – nobody is watching. They are too busy watching if somebody is watching.

More posts about: excellence, practice in Lifestyle
« Everybody wants to be Free. Nobody wants to change.
The Internet is not a Mass Medium. Or is it? »