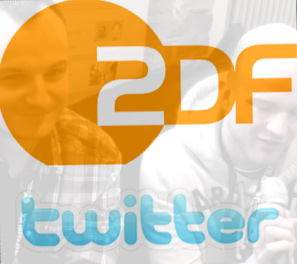 Today I read a kind of story which I would like to read more often. It’s the story of a state-run television, Twitter and two normal people like you and me.

Marco Bereth (25) from Southern Germany creates a Twitter account called “ZDFonline”, ZDF being the second national television in Germany (“Zweites Deutsches Fernsehen”). It’s about the equivalent of creating a Twitter account in the name of the BBC!

Back to the present:

The Twitter-account @zdfonline has 44,000 followers (while following only 65). Some have said it is the most popular Twitter account, ever, in German language.

How did it get so popular?

The weird thing about this is that it took a while before the ZDF found out about Marco and Michael. We can note in their favor, though, that the ZDF is a huge organizational apparatus with a lot of sub-branches.

So it took a while, but eventually they found out. Here’s what happened:

One day the two ZDF-fanboys receive a direct message from another Twitter-account, representing the sports sub-branch of the channel, @zdfsport with the following content: “We are a bit confused as to who is tweeting in our name? Could you tell us something about the authors?”

Now, what do they do? Do they reply? Get worried?

Nothing of the sort.

They keep tweeting, in the innocent belief that @zdfsport is also just another fake account.

Like the BBC, the ZDF has many sub-branches. One of them is called “neo” and targets young parents and middle-class employees.

Marco and Michael find out that there already is a Twitter account of the same name, which is not really being used. And they just got to get their hands on it. So they decide to send out the exact same message that they received from @zdfsport. The user behind this fake-account however, immediately gives in. He says he’s just an “ambitious fan” and willingly hands over the password. All this within one hour after they had sent the message.

The More The Merrier

And as the follower-count keeps rising and rising at an ever-increasing pace, they finally decide to contact the real ZDF.

They are invited to Mainz, the headquarters of the ZDF and needless to say, they are ready to expect the worst.

The meeting is led by the head of the central editorial office for new media, the marketing director and a few other representatives of the government-run channel.

At the end of the meeting, Marco and Michael don’t have a lawsuit on their hands but a job-offer. Yes, they are asked to tweet officially for the second biggest national television in Germany. This is what they got for playing their role so well.

“We couldn’t do it as professionally as they do, even if we wanted.”, says Tina Kutcher, boss of ZDF new media.

In a time where all too often the old media are fighting against the new, trying to protect themselves and sue themselves through any obstacles that threaten their conventional modes of operation, the reaction of the ZDF is not just smart but also very admirable.

The ZDF gets the best possible moderators for their Twitter-presence: People who actually care.

Also, it sets an example by this. Instead of punishing Marco & Michael, they offer them a reward. This sends out positive signals, a willingness to embrace the sometimes chaotic state of the Internet and  to relate to this situation pragmatically instead of programmatically.

It is like Sascha Lobo, revered German Social Media prophet, says: a “form of pragmatic Internet judo that would sit well on any company or medium.”

thanks to @jkuri for making me aware of this story

More posts about: government, Social Media, twitter in Lifestyle,Social Media
« Why the ‘Market’ Metaphor has Failed Us
When Your Phone Knows Where You Are Going »