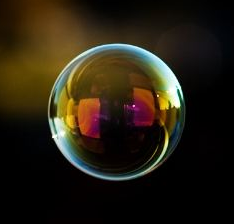 Recently, I read an article called “The Social Media Bubble” by Umair Haque, Director of the Havas Media Lab on the Harvard Business Review Blog.

Its hypothesis: The Net doesn’t increase connectivity and social change. In fact, it leans towards degeneration: The quantity of “friends” is rising, while the quality of relationships goes down.

In his own words:

“The “relationships” at the heart of the social bubble aren’t real because they’re not marked by mutual investment . At most, they’re marked by a tiny chunk of information or attention here or there.”

As right as this analysis may be, what strikes me about this quote is the usage of the word “real”.

In the wake of the dismantling of Germany’s ex defence minister Guttenberg’s academic and political credibility, it has become clear to some people that looking at the people on the Net as a collection of weirdos, detached from reality may be in need of revision. What happens on the Net does have consequences on daily life. And it might even cost you your job.

When we buy things online, the deductions from our bank accounts aren’t illusory, are they? Neither are the products that get delivered to our doorstep. When we read an article by the New York Times online, is it less real than when we read it on paper? Do the ideas or facts delivered count less, just because they are not printed onto dead tree material?

So, why – when it comes to relationships and social connections is there a tendency to disregard their online equivalents or extensions?

There is an unspoken expectation that the “Social Network” will somehow magically change and improve our social relations in the same way the first power loom revolutionized textile productions.

This idea is of course fuelled by various companies and their slogans that claim to be “connecting people” through things like the “Social Graph” and by this, most importantly – making the world a better place.

How that is supposed to work nobody asks. We see an ad where a father talks to his daughter on a mobile phone. He smiles. She smiles. A piece of retro-music plays in the background. Everybody feels all warm and fuzzy inside. Happy End.

What We Are Missing

In his article, Umair Haque speaks about “relationship inflation”. What this implies is that relationships are a sort of currency, which – after all – is the term most commonly referred to when mentioning inflation.

Wait a second. A currency? Relationships?

The idea here is based on the fact that relationships are a way of mutual exchanges of trust, information, attention, etc.

What sounds plausible at first, reveals its limitations when subjected to greater scrutiny:

Relationships indeed act as vehicles of exchange. No doubt about it. I do you a favor. You do me a favor. There you have your relationship. But calling the relationships themselves exchanges means equating the vehicle with the activity it capacitates. Put more simply: It’s like saying a road is a car, because it allows cars to drive back and forth on it! (Doesn’t make sense, I know.)

This semantic inaccuracy is not just widely unconscious, but is especially common among the talks of “connecting people” regarding online activity.

Again, describing relationships as an exchange is in itself not problematic. The problem comes, when we disregard the interiority of human relations in favor of their external manifestation and then believe that their quality can be enhanced through the use of technology.

Complaints or criticisms about the quality of online relationships mostly reveal only our own misunderstanding about what relationships really are.

It is impossible to reduce the relationship between you and your friend, employee or spouse to the amount of words, coins or kisses that are exchanged during an average day.

2. Relationships are not linear.

It’s impossible to reduce their interiority to a quantifiable graph, which (as complex as it may be) will always be a multitude of linear connections between points.

Whether it’s online or off-line doesn’t matter. Trust has to be established over an indefinite period of time. Some people will never trust each other. Others will form productive acquaintances and meaningful relations very quickly.

Personally, I don’t believe that the Internet can or should fully replace our human interaction. People naturally feel threatened by it and therefore react defensively. But it’s just a tool, in the widest sense. Tools are supposed to extend our capabilities, not replace them.

In our times of gadget-infatuation and blind drive to quantify every living thing under the sun, we tend to forget this simple fact.

The people already exist without having to have profiles on a Social Networking site.

The connections are already there, dormant in their potentiality – as are the positive or negative reactions to them.

Instead of blaming lifeless tools for our lack of communication skills and humanity’s limitless fascination with phenomena like Farmville on the existence of the Internet, maybe we should detract attention from the intimate relationships we have formed to our tools and ask ourselves why we don’t feel satisfied with our social connections, be it online or offline.

After all, extending our social relationships with the help of tools only makes sense, if we can value relationships inherently, not because of the benefits they might produce.

The way people express themselves online does differ. For example people vent more easily or tend to be more emotional, but the psychological structure beneath is the same.

If you can appreciate this fact, you won’t be bothered that people online are no more smarter, more compassionate, more friendly or more skillful than they appear offline.