Getting Rid of the ‘Mindful’ Myth

Sometimes we use words without thinking too much about what they mean or where they come from. And while it is true that in everyday communication, where we tend to speak very vaguely, the “gist of it” is generally enough to make yourself understood, today, I want to take a closer look at the word “mindful”. If that word doesn’t mean anything to you, you might not find this article interesting and are maybe better off doing something else.

The term “mindfulness” as it is now widely used in popular culture  often refers to an impartial observation of a situation, from moment to moment. But did you know it was only introduced into Western psychology in the 1970ies?  While definitions vary, there’s one thing they have in common: As Jon Kabat-Zinn, director of the Stress Reduction Clinic and the Center for Mindfulness points out “Mindfulness is a way of paying attention that originated in Eastern meditation practices.“ 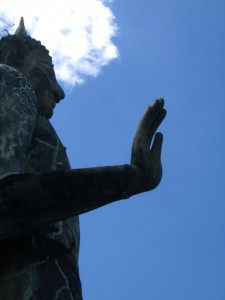 Put simply, Mindfulness is an import product. It’s an Eastern concept, originally called in Pali: sati, or in Sanskrit: smrti

And, while more and more the English noun “mindfulness” or its corresponding adjective “mindful” takes on those Eastern qualities of “paying attention in some kind of special way” (very vague what that actually means), the word mindfulness actuallyoriginated in the English language around 1375–1425 and back then meant something very different, namely: to be heedful, of: duties or responsibilities,commandments, etc.

Here’s an example from the King James Bible: “Be ye mindful always of his covenant; the word [which] he commanded to a thousand generations;” 1 Chronicles 16:15 – This was later translated as “remember his covenant”  and thus the term “mindful” can also be understood as “following” or even “obeying” something.

Now, is there a difference between keeping your duties, or obedience and observing something impartially?

In the same way Far East religions do not normally think in terms of “original sin” or “redemption”, the West did not understand the word “mindful” in this sense of “meditative awareness” before the 60ies counter-culture carried it into contemporary psychology and heaved it onto a throne. Those were, of course times of great experimentation with spiritualism, politics,sexuality, psychology and … well, drugs – and as with all experimentation – a lot has to go wrong before something goes right.

Since then it has become a widespread trend, to take certain concepts from completely different religions or cultures (the more exotic, the better) and inject them into the cultural homeland, as it were. This cultural blending has become part of everyday living for many. It’s considered an act of “wellness”, not an act of religious, or philosophical conviction to find buddha statues in your dentist’s practice, it’s “hip” to wear Indian bracelets in Starbucks and very “deep” to have ancient African tribal drums as a ringtone.

These are examples regarding physical artifacts. But the same can be done with ideas.

The problem with isolating certain aspects of one culture, belief system etc. and inserting them into your own customized lifestyle without really bothering much about the framework of origin as a whole, is that you’ll get very weird results (as with other forms of experimentation mentioned above) which are at best not beneficial, at worst, actively harmful.

Put simply: It creates a culture of trivialization.

It’s like isolating one special ingredient from an exotic meal and then mix it randomly with all kinds of other, more common ingredients.Imagine how long it will take until you get something that is not just tasty but even digestible!

Walking through the city of Berlin and looking at outdoor restaurants filled with huge Buddha and Shiva statues, I always wondered whether people in the East also have Christian-styled restaurants in which you can eat in the shadow of giant crucifixes, drinking your espresso under the reassuring gaze of Maria?

In any case, if you google for “mindfulness” you’ll find a lot of very weird things which are neither Western, nor Eastern, but simply pretentious pseudo-health organizations wrapped in thinly veiled attempts to get at your wallet or even ghoulish group-cults.

Also, there are of course teachers from the East who are trying to teach their so called “mindful methods” to a Western audience with the best of intentions, yet even in those groups you’ll often find a lot of pathological behavior because the prescription, designed for Eastern audiences, causes strange side-effects in Westerners.

Regardless of everything I’ve said so far, I still think the term mindfulness might prove to be useful to describe a new way of using our attention.

In order to approach this, we first have to free this term from all association of exotic colors, solemn rituals, the commune life and experimental psychology of the 60ies and so on and so forth.

The term “mindful” – as I use it in my writings – describes a very specialized way of using one’s attention, far from simply “being in the moment” or any such non-statement.

Put more simply: Using one’s attention in a very flexible way, being able to switch rapidly, focus intensively, withdraw attention, and so on and so forth. Mindful can be understood as the antithesis of mechanically, not dealing with a situation by rote but by a constant re-evaluation and fresh take on what’s happening.

Most of the time we aren’ t even aware that we have an attention that we can direct or retract from things. Our normal mode is simply to react to everything like a bouncing ball. You don’t have to be a psychologist to see that.

The reason why I like to use the term “mindful” especially in connection to computers, is that dealing with gadgets does weird things to our attention span:

In times of ubiquitous computing, we often have a hard time focusing on things, and the problem of children being diagnosed as faulty and having a short-attention span is largely related to a culture in which mastering or even recognizing one’s capacity for attention is vastly overlooked compared to mechanical skills like mathematical operations, etc.

Instead of commanding our attention, we are living in a state of constant distraction! Everyone that uses computers or digital devices is affected by this. For all the benefits that digital technology brings us, we need a different approach to re-claim our attention, here. And no, another piece of software won’t do it for us.

Actually, the traditional English word mindful as in “being heedful of a duty” makes a lot of sense, here, as in being heedful of having capacity for attention and taking responsibility for it! And it’s far more clear than a blurry sense of “meditative awareness”.

This is one reason why I use the term “mindful”, although I don’t agree with many things that are being advertised as “mindful”.

Also, when you talk about mindfulness and computers,sometimes self-described “meditators” or “spiritual” people will say, that technology is bad. Why? Because they are taking practices and cultural suggestions from Eastern cultures that are at least a few hundred years old and they’re trying to model their lives after it. If there was no computer back then, surely computers must be bad, right?

The aim is to ask the questions that fall in between the chairs.

It’s not about giving answers or revealing “secrets”. People who need re-assurance , of course, will always deal with questions only as a means of reaching an answer, but this is not the point, here.

Perhaps we should just appreciate these questions for what they are: stepping stones on an ever-increasing scale of learning.

More posts about: information age, learning knowledge, mindful, strategies, Technology, zen in Lifestyle,Technology
« 5 Things Everybody Ought to Know About Online Learning
Does the Internet turn us into Naysayers? »