Does the Internet turn us into Naysayers?

You’ve seen it before: Someone posts an angry (political) rant and it spreads like wildfire through Social Networks, the nervous system of the global wired community, flanked by equally angry comments, bursts of “righteous indignation” and lots of exclamation marks.

If not, look at the comment-section of popular online newspapers, not to mention Youtube videos! 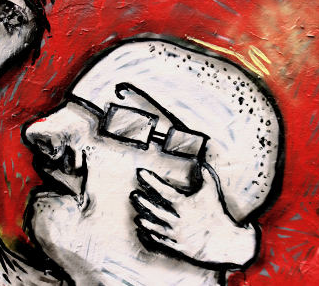 The term troll refers to people actively perpetuating disagreement and agression in an online community, appearing in this usage parallel to the proliferation of the first digital communities in the 90ies.

Flaming is a similar term, describing the openly hostile communication between two or more users in an online community, game, chatroom, etc. As Wikipedia rightly observes: “It is frequently the result of the discussion of heated real-world issues such as politics, sports, religion, and philosophy, or of issues that polarise subpopulations, but can also be provoked by seemingly trivial differences.” (emphasis added)

Both of those terms stem from the very beginning of the early history of connected computing, way before it became acceptable to the main-stream in the forms of Myspace and Facebook. Nowadays people get pressured for not engaging in online activity, back then you were an object of ridicule if you did!

Also, it seems that connected computing has not just given rise to increased connections between devices and therefore people, it has also perpetuated the mob of angry backlashes and very violent or simply ignorant forms of language some corners of the Internet have become infamous for.

One-Way Streets and Alleys of Ignorance

It seems there is not much that can be done to prevent this form of “debate”.

It has become an integral part of the Net as we now know it.

In its most common form, behind those trolls you’ll simply find average people venting their anger or biased perception who feel re-assured to say things they wouldn’t dare to say in public, because their face and identity are (seemingly) protected by the screen.

An article on NewScientist (the article mainly deals with email, although its observations are true for other areas) explains that “Social psychologists have known for decades that, if we reduce our sense of our own identity – a process called deindividuation – we are less likely to stick to social norms” (as quoted by TechCrunch)

There are of course sad examples of truly harmful individuals or organizations that use the Internet to openly incite violence or other crimes against other individuals or organizations. And although the former might appear to express themselves very similarly to the latter, I want to draw a thick diving line, here between criminals who use the Net in an organized way and average individuals who tend to flame while being otherwise pretty normal people.

So, why exactly do we see such a proliferation of negative language on the Internet? The obvious reason we have already given: People feel protected. So they don’t think twice to say something stupid.

But there might be a deeper reason. To understand this, let’s have a look at the less-famous twin-brother of the Naysayer:

Something that has (as far as I can see) only appeared since Social Networks started to become more socially acceptable on a wide scale, is the binary opposite of what we’ve been speaking about so far: Yes, the Yaysayer!

The Yaysayer thrives on platforms like MySpace and Facebook and its primary form of discourse is violent agreement!

It expresses itself through the over-use of emoticons and, yes – hearts or baroque ASCII signs.

Also, since the proliferation of Eastern esoteric teaching in the mainstream culture, the Yaysayer will often dabble in philosophies such as “being carefree in the moment” , “manifestation techniques” and – of course –  “positive thinking”.

Among the avatars or visual imagery preferred by the Yaysayer are elves, fairies, mandalas, fractals, dolphins and other insignia of the contemporary “feel good” culture. (This is not to pigeon-hole people but to show a pattern, by the way)

In fact, one could argue that Facebook has epitomized the common characteristic of the Yaysayer in its ever-agreeing “Like-Button”.

There are platforms where you can vote content or messages up or down. In the Facebook World this two-way street has given way to only one option: The almost dictatorial thumbs-up “LIKE” which has become a new virtual currency, supposedly signifying social acceptance and popularity.

If you look at both the characteristics of the Yaysayer and the Naysayer you will see that they have a lot in common:

And while the naysayer, the troll or the flamer is in some ways a more established resident of the Net, the Yaysayer is working hard to step up to the plate and mark the Social Networks of our time with its glittery glue of “heart-warming positivity”.

Computers think binary. They know only Zero and One. Isn’t it ironic, that humans, analog beings that we are – who built those digital brains – are perpetuating a binary discourse by the use of our own digital creation?

Now, one can argue that people always tended to react to certain topics in a very biased way, with or without digital devices.

And, while this is certainly true, also the amount of writing has increased exponentially during history and is still rushing forward at an overwhelming pace, largely thanks to digital text processing and publishing which allows you to read those very lines.

For my part, I am very interested in how all of this changes our language. Does the increased quantity of online debate increase the quality of discourse? Does it debase it? Or are those questions themselves simply fading out of fashion?

What are, in fact, the best places online for having conversations that are less-linear, less prone to producing one-sided reactions? Is it the (almost extinct) Forum, with its nested threads or the top-down sequence of comment sections, the cross-linking of blogposts, video responses, chatroom frenzies or maybe even the exchange of asynchronous Tweets?