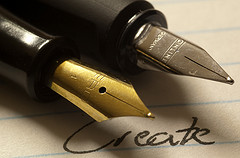 A good headline is what makes the difference between an article being read or ignored.

Even more so, if you are writing blogposts.

The headline is the only part that most people will ever see of your writing! It might appear in their Social Stream, in their email inbox or somewhere else and in the few split seconds of skimming it, the fate of your article gets decided.

If your writing is solid gold but the headline is less than mediocre, you’re actively blocking it from being read!

A great headline is like the store-front of a restaurant. It’s meant to get people to come inside!

But what are the mechanics behind a good headline? And how to write them?

Bill Walsh, copy chief at The Washington Post once said that “Writing headlines is a specialty – there are outstanding writers who will tell you they couldn’t write a headline to save their lives.”

While there is a certain truth to that, it’s not entirely like that, of course.

Here are a few pointers to get you started.

1. Stirring Interest And Rolling Out The Red Carpet

The most important aspect of your headline should be to generate interest. Don’t be afraid to try something funny or a bit controversial. Almost anything goes, here, as long as you don’t mislead readers. Nobody wants to eat at a restaurant that promises “The Biggest Steaks in Town” on the outside and inside sells only vegan mock-up meat. But more about this in the next point.

2. Making a Promise And Sticking To It

At the core of each headline there is a simple promise. This is why “How-To” headlines are so effective: They promise specific information inside. Furthermore, they imply a simple process that anyone can follow as in “How to Fix A Broken Tire”. Another popular way to headline is with “Why”, as in “Why Most People Fail At Chess”. Those headlines clearly promise to give answers. But even if headlines don’t start with “How To” or “Why” they all still dangle a carrot in front of the reader’s eyes. Whatever you do, make sure to deliver on your promise! At least in some way! A good way to do this is to…

This is a no-brainer but very effective! The reason for writing your headline first is that once you have set up a precise promise you can cater to it directly, word by word, whereas if you write the article first you might get a headache later, trying to find out just what kind of promise it is you’re catering to…

Another sure-fire way to write headlines that work is to use lists. Yes, you’ve seen those everywhere. For a simple reason: They work. And the reason you’re reading these very words might be because of it. But why don’t content writersever seem get tired of them?

This is actually one of the most difficult parts. Don’t write headlines that contain to many “big words”. Not everyone knows that the word oxymoron has nothing at all to do with a moron, for example. In the same vein, avoid puns in your headlines, as clever as they may seem to you. Again, for most people the headline will be the only part of your article they’ll ever read. Irony can easily fail when seen out of context (which headlines almost always are!) Instead, write headlines that spell out the promise as clearly as possible without complicated words or ambiguity. If you couple this principle with offering answers to questions that many people ask themselves, your headline will be a sure success.

6. Message In A Bottle

I’ve said this before but I want to repeat it: Your headlines will mostly be read outside of your blog. They will be squeezed in between a million other unrelated bits of information by other people. It has to be able to stand and walk on its own. Therefore, when you write the headline, use the “Message in A Bottle Scenario”: What would a person think that reads this, somewhere far away without any hints as to who wrote this message or in which context it belongs. If you can come up with clear answers, there’s a good chance that your headline works.

Look at what others are doing. Develop an eye for headlines. What works for you? What doesn’t? Look at newspapers and blogs all over the place. Then, look at some more. Imitate, modify, experiment.

Here’s an interesting analysis I’ve found for you that looks at how a popular blog uses headlines.

More posts about: blogging, publishing, writing in News
« Writing A Bestseller Might Be A Lot Easier Than You Think
How To Slow Down Your Life And Kick-Start Your Online Business »